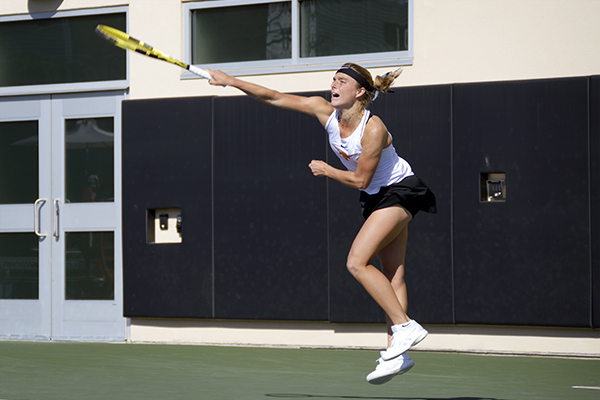 The women’s team was tasked with a daunting wind, which regularly halted serves and forced errant hits against Iowa State, but the men’s team had significantly less trouble with Tulsa. In the end, the women’s team scooped up a 6-1 win over Iowa State, while the men dominated Tulsa and Rice 6-1 each to improve their win streak to three matches.

“One interpretation is that they fought very hard, (but) they got in compromising positions from perhaps not performing to the level that they’re capable,” women’s head coach Howard Joffe said of his team’s effort against the Cyclones. “We happened to win one out of the two, but I think that’s more academic. (I think) what’s more important is did they or did they not profit, and the hope is that they do.”

Although Joffe was concerned with underperforming, the doubles duo of senior sisters Anna and Bianca Turati gave him little to worry about. The two returned to the court together for the first time in a week and made quick work of their opponents, winning 6-1.

“It was really fun playing with (freshman Gabby Cusano), but I’ve been playing with my sister for a long time, so it was fun to get back with her,” Bianca said. “It’s just fun because we can talk in our language, we can support each other. It’s different because you’re playing with your twin sister.”

The Longhorns will take a two-match break from Big 12 opponents and face Yale and Central Florida in Orlando this coming weekend.

Meanwhile, on the north courts, the men’s team opened their doubleheader with a 6-1 win over Tulsa. The Longhorns made quick work of Tulsa by handily sweeping the doubles point with promising wins from the No. 32 ranked doubles team of senior Christian Sigsgaard and freshman Siem Woldeab and another win from the duo of senior Yuya Ito and sophomore Chih Chi Huang.

The Longhorns would continue their dominance in singles, with Tulsa’s only point coming from an Ezequiel Santalla win over Texas’ Huang, but the real theatrics began in the second half of the doubleheader. A steaming Rice team put the No. 3 Horns on the hot seat by stealing the doubles point with an upset win over Texas’ No. 9 doubles team of Sigsgaard and Ito.

The Longhorns would need to win the majority of singles matches in order to compensate for the dropped doubles point.

Texas went into the second match against Rice rolling, and went on to take every singles point, turning what could’ve been an upset loss at home into a blowout 6-1 victory.

“When I looked back at the two scores of the day, we won both matches 6-1,” said Bruce Berque, Texas men’s head coach. “And those are two pretty good teams to be playing on the same day.”

The men’s tennis squad will be back in action on the Forty Acres this Saturday with a top ten duel against No. 9 Columbia, while the women’s team travels to Orlando for weekend matchups with Central Florida and Yale.