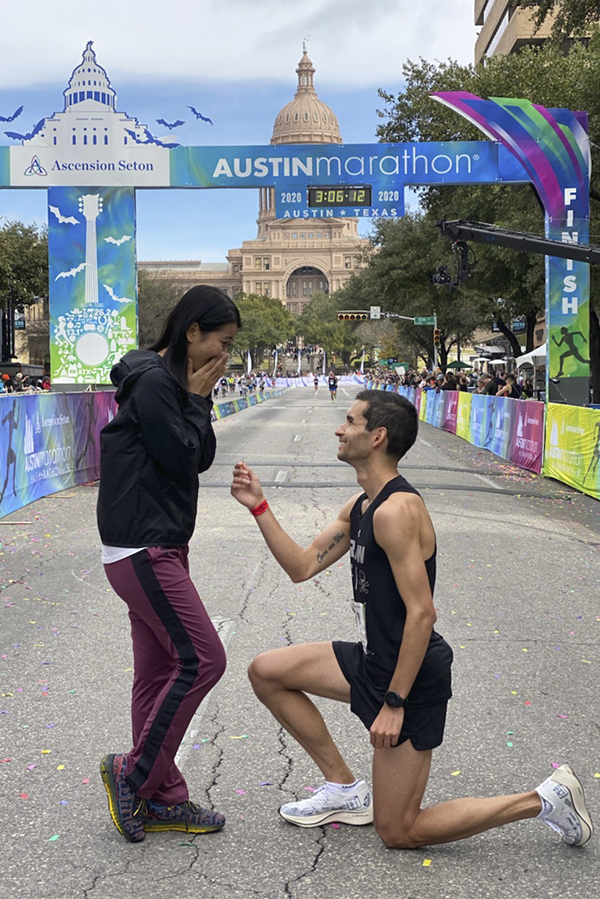 Completing a marathon and proposing to his girlfriend were two things Mark Pinales had never done before. Within the span of a few minutes, both of those things changed.

On Feb. 16, Pinales, a former UT cross country runner, proposed to his fiancee Tiffani Nguyen at the Austin Marathon finish line. Pinales said the idea for the proposal sprung from a lighthearted challenge made by Nguyen months prior.

“Tiffani asked me what my biggest running goal was, and I said to run the Austin marathon and ideally win it,” Pinales said. “And she said, ‘Okay, well I want you to do that and then propose to me.’”

Nguyen’s idea gave Pinales the push he needed to begin planning the proposal — something he said he had been wanting to do for a long time.

“I didn’t know exactly how I wanted to (propose), and this was a really good way to make that happen,” Pinales said.

After solidifying the idea for the proposal, Pinales called media outlets to let them know of his proposal. He said he even had members of his running group help get Nguyen Under Armour athletic clothes for the special occasion.

“I had it very well planned out. It was very exciting,” Pinales said. “The race was the hard part. The actual proposing was going to be the easy thing.”

Despite getting injured in January, Pinales still decided to pursue the marathon. Toward the end of the race, those injuries began to flare up.

“The ring really kept me motivated,” Pinales said. “I walked and jogged six or seven miles just to get to the end, just to see her. She was definitely the driving force that got me through that race.”

When the moment finally came for him to propose, Pinales said he was amused at Nguyen’s reaction.

“She got a little excited. I got down on one knee and started saying my little speech that I had been practicing, and she goes and snatches the ring,” Pinales said. “It was the best day of my life so far.”

Pinales runs several races a year, ranging anywhere from 5Ks to now marathons. Since the start of their relationship, Nguyen said few things will keep her from attending one of Pinales’ races.

“I try my best to make it because I know it’s really important for him, and I just love being there to support him,” Nguyen said.

Nguyen said by the time of the marathon, she had forgotten ever joking about Pinales proposing at the race.

“I was just really, really in shock,” Nguyen said. “(Now), I think I (have) finally calmed down and realized that we’re engaged. It’s really exciting.”

The couple currently live in Austin with their two feline friends, Nala and Cat. A few days after the proposal, Nguyen said she had already had a solid plan for the wedding.

“I had the plans in my head, and then I spent not that much time creating the workbook (for the wedding),” Nguyen said. “And then I realized, (it was only) the Monday morning after the race.”