The Kidney Club: From diagnosis to post-transplant 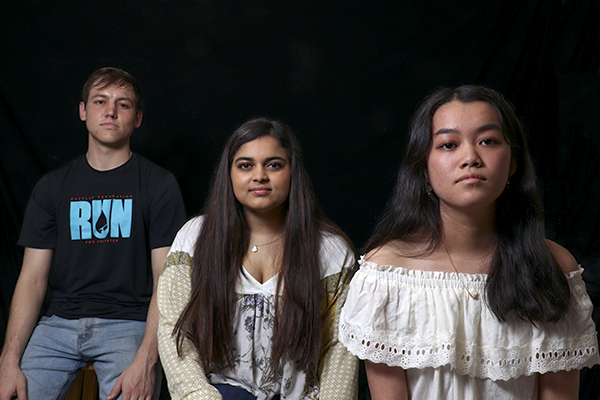 On March 12, 2019, I forced myself to breathe, barely awake in my hospital bed. Tubes blew oxygen into my nose. Needles dug into my neck and arms. But I was the healthiest I had been in years.

My new kidney was tucked under a fresh, 5-inch scar, finally removing the toxin build-up in my blood. Relief and discomfort overwhelmed me, and both feelings would follow me from my hospital bed to UT as I recovered from my kidney transplant surgery.

Kidneys remove waste from the blood and control blood pressure. Mine, though, spent years shriveling up inside of me like cut flowers left out of water too long. Week-long migraines and constant vomiting led to my diagnosis, but soon after, I received a kidney transplant from Leah Waters, a journalism teacher at Frisco Heritage High School. She heard about me and decided to get tested. When she found out her blood type matched mine, she decided to give me one of her kidneys.

Although I count myself lucky, and having a transplant is a huge step forward, kidney disease is a minefield. Being a young person with kidney disease is isolating —  I was one of the 12% of people who received kidney transplants between the ages of 18 and 34 in 2019, according to the U.S. Department of Health and Human Services.

Since then, I have searched for and found two other recipients at UT, who each have faced numerous challenges. For Mason Bettes, it was balancing dialysis with being a full-time college student. For Nhi Tran, it was dealing with different side effects all throughout high school.

Today, March 12, 2020 is not just the anniversary of my transplant — it’s also World Kidney Day. Together, we can manage the hardest part of being young with kidney transplants: feeling alone in our experience.
3 months post-transplant: Mason Bettes
On December 18, 2019, biochemistry sophomore Mason Bettes had kidney transplant surgery. He spent three days in the hospital after receiving his new kidney from his father.

Bettes was born with chronic kidney disease and only one kidney, which failed during the summer after his freshman year of college.

“When my kidney failed, I remember just staring out the window of my hospital bed for hours, never saying a word, contemplating life, like, ‘This is so pointless,’” Bettes said. “I knew what was about to happen. I was about to go on dialysis for a long time.”

People go on dialysis to survive when their kidneys fail, said Nicole Turgeon, chief of abdominal transplant surgery at Dell Seton Medical Center. She said that in hemodialysis, a machine removes toxins from the blood, and people are exhausted afterward because it is a huge blood exchange.

“The first time I walked into the (hemodialysis) clinic, there were a ton of elderly, sick people,” Bettes said. “They tried to talk to me because I was the youngest person they’d ever seen there, but I just couldn’t do small talk in the dialysis chair.”

In August 2019, Bettes’ father got tested and matched as a donor for his son. They delayed the transplant surgery to that December, hoping Bettes could finish the fall semester and his father could take less time off from work.

During the four months in between, though, Bettes continued dialysis while taking a full 12-hour course load and working part time. He switched to peritoneal dialysis, where Turgeon said a tube in the stomach uses fluid to remove waste from the blood.

Three months after transplant, Bettes said he looks back on those months as a blur. He said he now enjoys life as normally as he can, working out every day and going out with friends.

“I felt very different from everybody else (during dialysis),” Bettes said. “Now I feel more normal, but still different at the same time. Normal life, normal everything, but not the same. I don’t think a lot of people our age have to go through something like that.”

Bettes deals with differences like drinking two gallons of water a day and taking medicine to suppress his immune system, so it doesn’t attack the unfamiliar donor kidney. He avoids sickness, and even the common cold could send him to the emergency room.

“Imagine if we couldn’t have transplants,” Bettes said. “We’d all be dead. I mean, I would choose to die over dialysis for the rest of my life.”
2 years post-transplant: Nhi Tran
On April 20, 2018, psychology sophomore Nhi Tran woke up early to her mother unhooking her from the peritoneal dialysis machine. Before Tran could fall back asleep, her clinic called — a registered organ donor had died, and their kidney was a match.

“I was more scared than anything,” Tran said. “Obviously, it’s a great thing, but it’s scary. This would be one of the biggest surgeries I would get in my lifetime.”

Tran learned about her declining kidney function during her freshman year of high school. She missed months at a time throughout high school, getting treatments to prolong the kidney’s function. Sometimes, she couldn’t eat anything for days at a time. Other times, she said steroids made her swell up like the Michelin Man. Teachers visited her at home to deliver work.

“I don’t think people realize how hard it is,” Tran said. “They were like, ‘Oh, dialysis won’t hurt that much.’ Until you’ve experienced it, though, you cannot understand it.”

During the second semester of her senior year, she remained in the hospital for a month doing peritoneal dialysis.

“All the schoolwork piled up, but no matter what I did, I couldn’t get better,” Tran said. “When my doctor (sent me to the ER), I felt like I was going to pass out. I was just really tired. I was so tired, I didn’t have any emotion left.”

Tran received transplant surgery in April. Now, nearly two years after her surgery, Tran said she doesn’t think about it often. Many of her current friends don’t know about her condition.

Tran said her mom had a kidney transplant when she was young, which makes her life seem more normal.

“My mom also has to take care of herself after her own transplant, and it’s just a day-to-day thing now,” Tran said. “It’s just part of my routine, and it’s a part of me now.”

Transplanted kidneys don’t last forever. Tran’s clinics said hers could last at least 20 years. Tran said it’s scary, but takes care of herself and tries not to think about it.

“Once I found out this one thing, everything toppled over,” Tran said. “Eventually, I was able to put up the dominoes again (and) build back my life after everything.”