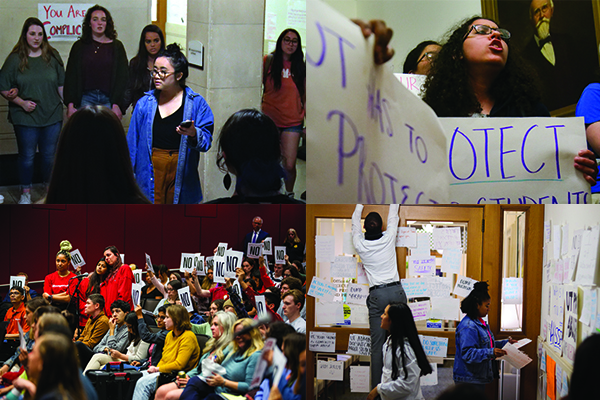 On March 2, Husch Blackwell, the law firm contracted to examine UT’s Title IX and misconduct policies, presented President Gregory Fenves with their initial recommendations outlining much-needed reforms to UT’s existing policies. Many were changes that organizers and activists had been calling for since long before the firm was hired.

Professors who violate sexual harassment, assault, stalking or interpersonal violence policy will be presumed fired save for the consideration of a few — hopefully strict — mitigating factors.

Names of professors who are not terminated for violating harassment, assault, stalking or interpersonal violence policy will be proactively released to the public. This is a policy that will be unique to UT, thanks in no small part to the work of past Daily Texan editor-in-chief Liza Anderson, who has called for this since 2018.

A clear timeline will be established for the Title IX Office and the Office for Inclusion and Equity for all cases.

Alternative resolution and restorative justice options will be made available for complainants who wish to not pursue a formal investigation.

Mandatory training on misconduct and reporting will be required for all University employees.

These recommendations, while approved by Fenves, still have to be approved by the Board of Regents. We urge them to implement these desperately needed reforms to UT’s appalling system.

This work is fundamentally that of the organizers, activists and protesters who tirelessly fought a system that was harming our peers. As an editorial board, we have immense gratitude for these activists and for the change they have fought for and won.

Although Fenves did not acknowledge these student activists when he accepted the recommendations, they are the reason our campus will be safer. We reached out to sit-in organizers, founding members of the Coalition Against Sexual Misconduct and members of the Misconduct Working Group to hear their reactions to the report and to thank them for the work they have done. Here is what they told us.

How did you react when the recommendations were released?

“I was shocked. I honestly still haven’t been able to fully process the news just because I’ve been so deeply involved in the day-to-day organizing that I didn’t bother to think or imagine what the outcome of our organizing could look like. This isn’t the end-all, be-all; our work doesn’t stop here because the sexual issue is not just an administrative issue but also a cultural issue that is rooted in a lot of structural concepts and barriers. It is, however, a huge step in the right direction, and I hope other institutions will follow.”

“When I saw Fenves’ email, I was in class and about to break down in tears from how ecstatic I was. Seeing the new policies get implemented was exactly what I needed to keep me motivated, and it felt so good to know that all of our labor since November was actually worth it. Not only did we achieve actual, tangible change but this was a historic moment seeing that UT-Austin is now one of the first universities in the nation to continuously and publicly release the names of the employees who have been found guilty of sexual misconduct.”

“Considering where we started, the fact that the University has accepted the need for more confidential advocates, stricter prohibitions against sex discrimation and more transparency is a tremendous step forward. I’ve fought for increased transparency and a better process for years now, and this is the first time I’ve felt that the University is actually listening.”

What do you think of the recommendations? How well do they address the need for misconduct reform?

“These are recommendations that should have been implemented ages ago, and it took the advocacy, emotion and time of students in the working groups with the lawyers, at the student forum and during the protests to get us here. Some of these recommendations are directly from students who know best how misconduct has affected them during their time at UT. While the recommendations are a good start, such as the presumptive termination policy and proactive release of names, I believe they could better address misconduct reform by being specific about the implementation. Additionally, I would have liked to see more comprehensive nonretaliation policies for students.”

“What is crucially missing here is retaliation. This has been brought up continuously in conversations with Husch Blackwell. Retaliation procedures are in dire need of reform at UT-Austin. The University has a “policy” on retaliation (through OIE), but this process has a prohibitively high burden of proof for those victimized. Retaliation can take the form of spreading information about witnesses and complainants, mentioning such people to outside of University colleagues, subpar letters of recommendation. For a graduate student, this can make the difference between getting an academic job after graduation or being unemployed. It is unacceptable that complainants and witnesses, who speak out in the best interests of their peers and future peers, (are) in danger in such a manner.”

“One of the recommendations made my jaw drop — UT is going to start releasing the names of professors who are found in violation of sexual harassment policy but who aren’t fired. This is huge. UT is the first university in the country to do this, and I can’t stress enough how significant this change is. When I started advocating for a list more than a year ago, UT responded by telling me how unreasonable that is, how it would never ever happen. This is a tremendous win for students.”

“I think a major point that’s missing from the law firm’s recommendations is the continuation of the Misconduct Working Group. I believe it’s very important for the Misconduct Working Group to continue on for years, as long as the University exists, because this issue shouldn’t continue to be done behind closed doors with only experts and the administration. Students, especially students from the Coalition Against Sexual Misconduct, need to actively be in those rooms discussing our viewpoints, solutions and stories of how we’ve been affected by the system. Finally, we as student activists are going to constantly be improving upon our student demands and holding the University accountable in implementing these changes in a timely manner.

“Power concedes nothing without struggle. It’s taken an incredible amount of energy and labor to get the University to respond to this injustice at all. These recommendations do not represent enough of a change, so we will have to continue to struggle for justice, support for survivors and to protect students and employees from retaliation. As a university community, we’ll need to be vigilant to make sure they actually do what they say they’re going to do and to keep demanding more meaningful action.

Harassment and abuse of power is endemic in higher education and always has been. This is not a new struggle. University management knows this. They knew it from when they were in undergrad and grad school, and yet they refuse to listen to activists and threaten them with disciplinary action. We will keep fighting.”

The advocates who made these changes happen all say the same thing: This fight isn’t over. It never will be. However, we have finally made progress in keeping our peers safer and holding abusers accountable.

It can be easy to get discouraged about making change on campus. We have to do immense work to even get our foot in the door, and if we succeed, administrators can just wait for campus to forget about issues when organizers and advocates graduate.

But when we work together, we win. Fenves may not acknowledge the role that we as students played in these changes, but never forget that your voice and your activism matters. Together, we can make UT change and better the lives of students across this campus.