Students in service industry face unemployment in midst of pandemic 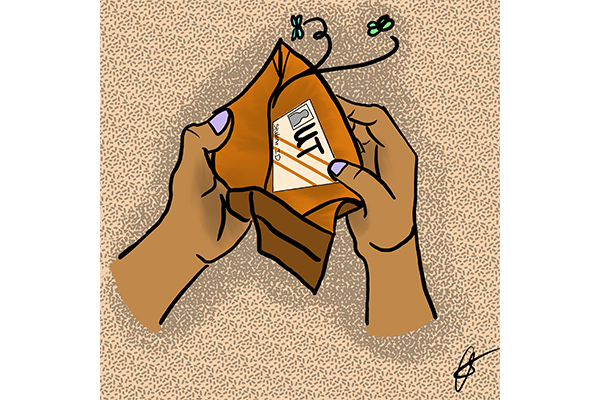 In response to an announcement from Mayor Steve Adler that called for the closure of dine-in services and bars, Austin restaurants have been limited to takeout only. While some businesses have remained open, others have closed or laid off a portion of their staff — some of which includes students.

Caught between the choice to file for unemployment or search for another job, students say they are stuck in limbo.

Human development sophomore Michaela Rentz worked as a waitress at Pluckers but said because she isn’t trained in the pickup process, she can’t work.

“I just wish it would have happened more gradually, like people would have taken precautions earlier (and) developed a plan prior to all of this happening so it wasn't (so) abrupt,” Rentz said.

Rentz is currently on a leave of absence until further notice and is in the process of filing for unemployment. She said she is relying on a loan from FAFSA to pay for her expenses.

“If I didn't have that, I would definitely have absolutely no money right now,” Rentz said. “It's gonna be really hard for everybody else to just bounce back.”

Along with Pluckers, Elizabeth Street Cafe has also been able to modify their service to curbside pickup. Social work graduate student Alexis Aguren lost her job as a waitress there after they made the decision to lay off everyone except salaried managers.

While Aguren thinks the decision to close dine-in services was the right one and it should have happened earlier, she said employers should have been more considerate of their employees.

"So many people have just lost their jobs and don't have any opportunity to make money,” Aguren said. “It's not like you can just go to another restaurant, you know?”

Aguren said she’s started looking into either applying for jobs at grocery stores or filing for unemployment. She said although she needs a job, she fears exposing her partner and roommate, who has asthma, to the virus.

“We're just all kind of stuck in this limbo,” Aguren said. “If you don't have experience elsewhere and nobody's hiring, you're hoping that the government takes care of you with no guarantee on that.”

With sufficient funds left to cover rent and bills for one month, Aguren said she will most likely have to start using credit cards to pay for her expenses.

“I'm probably going to have to go into debt to survive,” Aguren said.

In addition to losing money, journalism senior Alexander Thompson said losing his job at the Alamo Drafthouse Ritz meant a loss of routine and a way to relieve stress.

“Work was my scapegoat … from everything going on here at campus,” Thompson said. “I go downtown, have a good time with my coworkers, make money and it was just a stress reliever.”

All Alamo Drafthouse locations closed on March 17, and as a result, Thompson was laid off. He said he scrambled to apply for jobs at Whole Foods and Sprouts Farmers Market, but has now filed for unemployment.

Thompson said he has enough money saved to pay for his rent and other expenses. However, he said he knows that many service workers will be hit hard by the closures of businesses.

“People should still remember that our industry got hit really hard and that we weren't blessed to work at home,” Thompson said. “I'm sure a lot of people are talking about being generous to one another right now, but also they should continue to be generous going forward. Who knows how long people are going to be unemployed. So, you know, tip well, treat people well.”