Student businesses suffer, move off campus in wake of closures 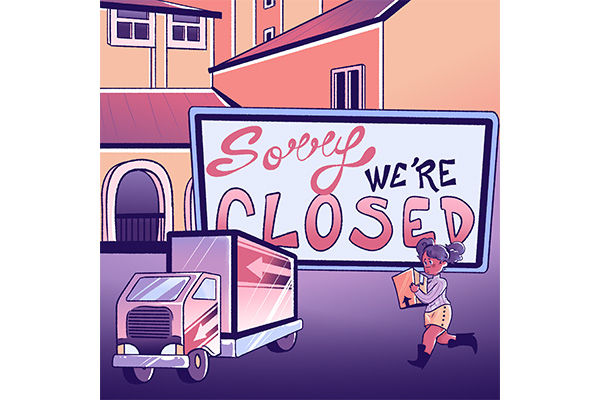 Closures of dormitories and a general lack of students on campus have left student-run businesses with two options: move operations or shutter until the fall.

For business freshman Kachi Akamelu, the transition to online classes meant canceling on-campus appointments for her services as a makeup artist. Akamelu said she did not completely have to shut down, as she is moving her business to Houston until she returns to campus in the fall.

“I had to cancel and come back home to Houston because of the whole thing that was going on on campus,” Akamelu said. “I didn't want to be (in Austin). Everything was closed. I didn't have access to a lot of things. I didn't have my car, so I thought it'd be better to come home.”

Akamelu said moving her business to Houston would allow her to have better access to materials and her clients, but she had already lost money with cancellations of appointments over the break. She had already purchased materials for those clients, intending to cover the cost with her fees. She is no longer taking clients, as the circumstances have become more severe since she first spoke with the Texan.

However, other students’ businesses rely on the structure of campus to thrive. Government freshman Brandy Branham said her braiding business exists as an affordable hairstyling and braiding option for students who are away from their normal service providers. In her own hometown, Branham said even she has a hairstylist available, so there is no demand for her services.

“I'll probably just revamp it up again when I get back to school and let everyone know I'm back, and then I'll be braiding again,” Branham said. “So people want to get braided, and my whole motto is ‘Affordable prices for college students’ because other braiders in Austin are just ridiculous with their prices. It's just that right now, it's kind of like, ‘Crap.’”

These circumstances have disrupted both Branham’s business and her plans for her second semester. She said this is “crazy,” and while she doesn’t like being away from the campus environment, she recognizes the need to go home and stay there during a public health crisis.

“We've really missed out on a lot this semester,” Branham said. “When I go back to school, we will have been at home more than we have been in college. It's my freshman year, so it's just a bummer.”

Sent, a business aimed at providing affordable shipping rates to students sending packages between Austin and the Dallas-Fort Worth area, also had to shut down. Computer science freshman Suket Shah said he and his co-founders are working on improving their business in the meantime.

“We're interviewing UT parents in the Dallas area to see what features they would like to see and that they think we can improve on,” Shah said. “When we come back in the fall, we want to have the best possible service to offer. We’ll hit the ground running from day one of school.”

In all this, there is a glimmer of brightness: linguistics sophomore Blake Maynard said his online language learning business Backpack Languages is enjoying increasing interest from students.

“I think we're getting about five more (emails a day),” Maynard said. “But they’re interested in languages that we haven't been actively working with so far. A lot of people are coming back as well because we had some clients from earlier (in the year) who are finding more time but ended up, like, dropping off a little bit. They’re coming back to this.”