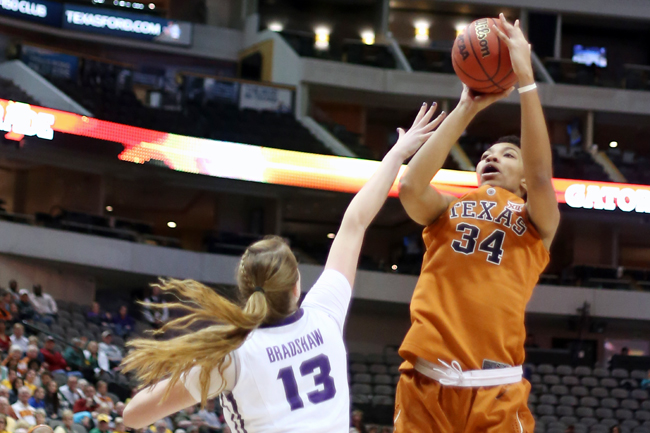 Although Imani McGee-Stafford was a star on the Texas women’s basketball team from 2012-2016 and went on to pursue a career in the WNBA, she’s not an athlete who solely “sticks to sports.”

“I’ve never been good at that,” McGee-Stafford said. “I was the kid that got in trouble for talking too much and sticking up for people and just having an opinion all the time.”

So it wasn’t too shocking when McGee-Stafford’s current team, the Dallas Wings, announced March 30 that the center would forego the next two WNBA seasons to pursue a law degree from Southwestern Law School in her native Los Angeles.

For McGee-Stafford, it’s always been bigger than basketball. Even as she collected first team All-Big 12 honors (twice), helped lead her team to the Elite Eight and increased her draft stock until she was drafted 10th overall, deeper developments were taking place during her time at Texas.

“She evolved into sort of a voice for our program and a voice for other young women in other areas,” said Karen Aston, former Texas head coach.

Off the court, McGee-Stafford decided to use her influence and experiences to advocate for mental health, women and victims of sexual violence.

“When I was in college at UT, I figured out what my purpose was, like why I had this platform that was basketball,” McGee-Stafford said. “Ever since then I've been trying to do the most I can to fulfill that purpose, so for me that means I share my stories as authentically and openly as I can as much as I can.”

McGee-Stafford’s activism didn’t stop once she began her WNBA career, and she used her offseasons to speak on issues she cares about.

However, after witnessing Supreme Court Justice Brett Kavanaugh’s confirmation hearings in 2018, McGee-Stafford decided she needed to do more than just speak.

From there, McGee-Stafford decided to become a human interest lawyer in order to change laws surrounding women’s rights and sexual violence.

While playing overseas in Australia, she took the LSAT and planned on applying to law school once her deal with the Wings was up.

But with COVID-19 concerns creating uncertainty around the status of the upcoming WNBA season, McGee-Stafford had to make a decision. Unlike select players in the league with protections and guarantees, McGee-Stafford wouldn’t be paid if she didn’t play.

“I don’t know what's going to happen with sports,” McGee-Stafford said. “But I'm (going to) have to figure out how I’m paying my bills because I won’t have that option.”

McGee-Stafford saw the current circumstances as a chance to pull the trigger and apply to Southwestern Law School, an institution with a two-year program that she discovered at a USC law school fair. Not expecting to get in, McGee-Stafford said she was accepted with a 50% scholarship.

It’s been a few years since McGee-Stafford studied accounting at Texas, so she’s unsure if she’s ready for the change.

“‘Am I?’ is the real question,” McGee-Stafford said. “I don’t know. We’re (going to) find out. I think it’s going to be easier because this is a choice, and this will be my first time in life ever having student loans. Now that I know what school costs, I need to make it work.”

Since making her decision, McGee-Stafford said everyone has been supportive, including her older brother Javale McGee, a two-time NBA champion center who now plays for the Los Angeles Lakers. However, surrounded by the legacies of her brother and her mother Pamela McGee, a two-time All-American and national champion at USC, she’s accepted that she will pursue her own path.

“As of now I'm pretty much the family disappointment,” McGee-Stafford said. “My brother is a two-time NBA champion. My mother is in the Hall of Fame. I'm totally a disappointment, but my success is not theirs. I’m not comparing myself to them. I’m making the most of my journey.”

McGee-Stafford said winning a WNBA Championship someday would be nice, but she’s thankful for the opportunity to show others that athletes are multidimensional and that “you really can have it all.”

“You know, ‘What starts here changes the world,’” McGee-Stafford said. “I still want to be a part of that.”