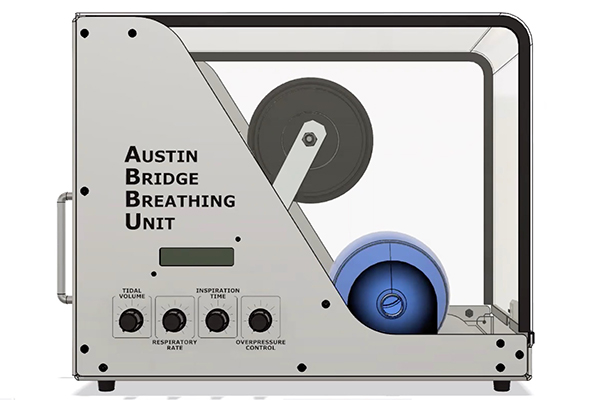 Courtesy of the ABBU Team

UT researchers are developing an automated breathing unit made from widely available materials, such as the windshield wiper motor from a Toyota Camry, to help solve the ventilator shortage caused by the COVID-19 pandemic, according to a press release from UT News.

The Austin Bridge Breathing Unit uses a windshield wiper motor to compress a manual resuscitation bag that provides oxygen to a patient, according to the release. It is referred to as a bridge unit because it automates the job of a health care worker but is less complex than a ventilator unit, said Arnold Estrada, a biomedical engineering research fellow.

“What we're building is a device that will replace a health care provider from squeezing on one of those manual resuscitation bags,” Estrada said.

Estrada, who is involved with the engineering aspects of the project, said ideally the bridge unit will be able to run nonstop for 10 days.

“The idea is, in a crisis situation, you might not have the really expensive full-blown ventilator available for every patient,” Estrada said. “So you could just put them in this device for a little while until a ventilator becomes available.”

Biomedical engineering professor Thomas Milner led the team of engineers that designed the breathing unit. Contributions were also made by medical doctors at Dell Medical School and respiratory therapists at UT San Antonio.

When the researchers started designing the bridge unit, they wanted to use parts that could be sourced locally and quickly, said Aydin Zahedivash, a Dell Medical School student and business graduate student. Zahedivash is also part of the engineering team.

“You want to make sure that the supply lines for these devices are neat and that you can make a sufficient amount of them very quickly because right now, time is of the essence but also supply,” Zahedivash said.

Nitesh Katta, a biomedical engineering postdoctoral researcher, said most of the electronic components of the device could be purchased at a Home Depot. Katta assisted with the electronics testing and programming aspects of the project.

When deciding on specific parts, Katta said the team checked each company’s website to ensure they had at least 20,000 units available.

Katta said the team created two separate design plans for the breathing unit: one for manufacturing at a large scale, and another for assembly in a short period of time by a group of engineers or people who are mechanically inclined.

“It’s just one motor with one arm and a wheel, and everything else is based around the (artificial medical breathing unit) bag,” Katta said.

Only one of the breathing units has been built so far, but Estrada said about 10 units should be built in a week. Once those are made, he said FDA testing will be conducted to make sure the unit works and is safe to use.

Although nothing has been settled, Estrada said the team may make the design available to the public and allow companies to license it at no cost. However, he said the team is also open to granting one company exclusive rights to the design if they want to build a large number of units.

“The main objective is to have as many built as quickly as possible,” Estrada said.

The need for this kind of technology is vitally important, Estrada said. Hearing stories about the lack of ventilators in New York and Italy motivated the team to work on this project.

“This essentially could be life or death for some people,” Estrada said.