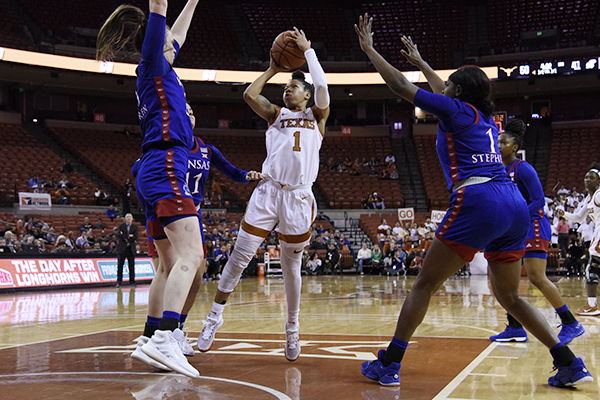 When Sug Sutton dressed up as WNBA legend Candace Parker for Halloween one year during her childhood, no one in her neighborhood could figure out who she was. But the former Texas point guard said she wore her costume with pride anyway because she idolized Parker and wanted to be just like her when she grew up

On Friday night, the Washington Mystics selected Sutton with the 36th pick in the 2020 WNBA draft. Now playing at the same level as her childhood hero, Sutton has become a hero herself to young women’s basketball players in her native St. Louis.

“No one really has anything bad to say about Sug. Everybody loves her, especially in St. Louis, so I think everybody is really excited to see that she got drafted,” said Jayla Kelly, a young player from Sutton’s former AAU club, Missouri Phenom.

Kelly, 17, said she’s been watching Sutton play since she was in sixth or seventh grade. While Kelly said she and Sutton weren’t necessarily close, Sutton made an effort to encourage her and watch her games whenever they did come in contact. Kelly said Sutton’s success after playing for the Phenom has helped pave the way for others in the area.

“Sug is just another stepping stone showing that St. Louis is a really big place for women’s basketball and so is the Phenom program,” Kelly said. “We even had a team named after Sug, and I played with that team. Just seeing her make it to the league … it really makes everybody who played on that team … say, ‘OK, if she can do it … then I can do it, too.’”

“She’s a great role model, and I look at her as a big sister now,” Williams, 15, said. “Just to have that relationship and to see her get drafted was really awesome. I’m so proud of her.”

Nicknamed ‘Baby Sug’ by Texas women’s basketball players when she came to watch the Longhorns a few years ago, Williams said Sutton has always made herself available to answer questions and offer support.

“It feels really good knowing younger kids from Phenom and from St. Louis look up to me,” Sutton said in an email. “I feel like they are the reason I go so hard and want to keep pursuing excellence.”

In her new role as a WNBA player, Sutton wants to continue giving back to her community by opening up a basketball camp for kids of all ages.

“Sometimes all these kids want is for someone to show them that they care about their abilities and that they are capable of accomplishing whatever they put their minds to,” Sutton said.

Kyrstyn Walker, 13, said Sutton is “the biggest person around in St. Louis,” so she and others at Phenom have followed Sutton’s career at Texas. Now, Walker wants to take a similar path.

“(Sutton’s success) makes me feel really confident being a basketball player in her same organization,” Walker said. “And I really want to go to Texas, too.”

With Missouri only now emerging as a hub for women’s basketball talent, Williams said she and Sutton have spoken frequently about “staying locked in and staying focused on the dream.”

And committing to the grind is exactly what Sutton has done. Battling through injuries and moving across the country to further her career, Sutton has not only achieved a lifelong goal, but she’s also inspired others in her community to aim just as high.

“For the young players who have future aspirations of becoming a WNBA player, keep working hard, and never stop believing in yourself,” Sutton said. “Down the road, it won’t be easy, but it is all about perseverance and staying consistent with your work ethic. You can do anything you put your mind to.”