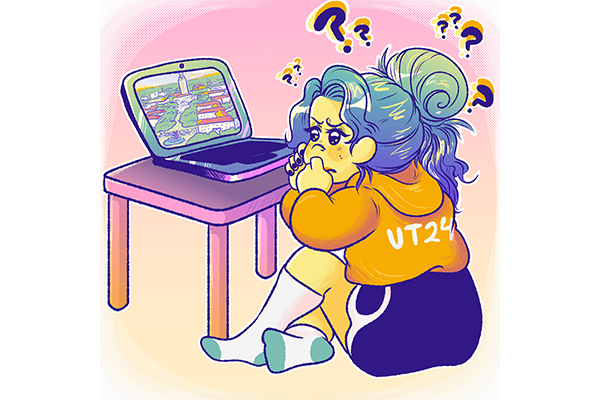 Incoming UT students are worried about starting their college experience amid the COVID-19 pandemic, as New Student Services works to format orientation to run online for about 10,000 students.

This will be the first time the event goes virtual since orientation started in 1949. Kyle St. Nicholas, assistant director of New Student Services, said that this summer’s orientation will be split into two parts: self-paced online modules and a livestream over three days.

Blake Schwartz, a prospective electrical and computer engineering freshman, said he was excited to visit the campus for orientation and is disappointed the event is going online.

He also said he was looking forward to seeing his adviser face-to-face to plan his classes and meet with peers that he’s already connected with via group messages.

“I won’t have that experience of actually meeting the people in person that I’m talking to right now,” Schwartz said. “I’ve been meeting people online, but it’s not the same.”

Zoe Owens, a prospective radio-television-film freshman, said the lack of in-person interaction in an online orientation worries her.

“I feel like orientation is a lot about connecting with people in person and getting comfortable with UT-Austin,” Owens said. “I’m really concerned how we’re going to be able to connect with other students. That’s what I was most excited for, and I don’t think that’s something you can really replicate in an online platform.”

Owens said she is nervous about the prospect of future semesters going online as a result of the coronavirus. She said radio-television-film majors need to be able to communicate with other people to have the best learning experience.

St. Nicholas said he sympathized with the concerns that Schwartz and Owens have. In response, he said the orientation staff has been working to move typical in-person orientation programming like discussions and games online and create new events to foster community.

“We're figuring out ways of planning interactive activities where students can connect with other students and learn about UT traditions, the city of Austin,” St. Nicholas said. “We're still planning to have wing meetings (online), which we've always found is a great way to help facilitate connections amongst the students.”

Normally, incoming freshmen would stay in Jester Residence Hall and the orientation advisers would lead different group activities in wing meetings for interaction between new students in the same college.

Additionally, he said some of the fees students pay for orientation might be reallocated to new events during Longhorn Welcome, the week students move to campus in the fall.

This fee has decreased from $297.50 to $150 for freshmen and from $73 for no housing or $128 with housing to $65 for transfer students, according to an email from New Student Services.

“In addition to the shirts and bags (that the fee covers), we're hoping that we're able to provide some additional in-person experiences during that time that will allow students to meet others,” St. Nicholas said.

Zach Hicks, orientation adviser and government sophomore, said even amid all the changes, he still believes he and other orientation staffers will still deliver a welcoming experience to new students.

“We are working nonstop,” Hicks said. “When summer orientation starts, we will help incoming students not only understand the Forty Acres but also call UT home.”