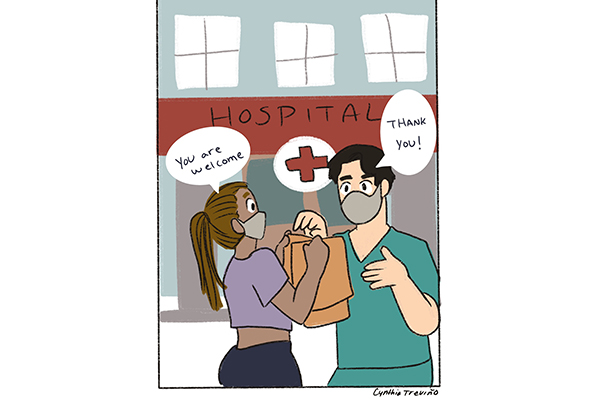 In the midst of a global pandemic, Alex Seiler said she saw an opportunity to serve.

Seiler, an Austin native and senior at Georgetown University in Washington, D.C., started the Austin branch of Fuel the Fight on April 5 in response to the coronavirus crisis. Fuel the Fight is a volunteer-based organization that utilizes 100% of its donations to buy meals from local restaurants for nurses and doctors on the front lines.

“We’re trying to sustain as many people’s livelihoods as possible as well as thank health care workers,” Seiler said. “Your donations (are) helping two different parties.”

Fuel the Fight originated in Philadelphia on March 20, but now has branches in 17 cities across the United States and one in London.

“This kind of organization seemed right up my alley,” Seiler said. “It matched up with my (studies in health care management and policy), my dad’s in the food business and one of my friends I went to Georgetown with, Cole (Berman), actually started the original Fuel the Fight.”

Seiler said Fuel the Fight Austin has partnered with 13 restaurants, including Home Slice Pizza and Biderman’s Deli, to provide meals to health care workers at four local hospitals, such as St. David’s and Ascension Seton.

“We try to focus on the restaurants that we know drive Austin culture,” Seiler said. “Small, local restaurants are the most pertinent to Austinites.”

With the donations Fuel for the Fight Austin is receiving now, they can provide free meals to around 25-45 frontline workers four times a week, Seiler said.

"After we do it once, the nurses get really excited about it and it’s really uplifting for them to know we appreciate all the work they’re doing,” Seiler said.

The Fuel the Fight team in Austin is led by Seiler and four of her longtime friends from high school. Two of these volunteers are Longhorns.

“We all were born and raised here, so Austin just means a lot to us in general,” marketing senior Claire Sanford said. “Being senior(s), we all have more time than we would in previous years to help out, and it’s honestly just a unique way to start our next chapters.”

Sanford and Hannah Ilan, an advertising and social work senior, are in charge of public relations. They created an Instagram account and a GoFundMe page for donations.

“We’re really trying to establish credibility, because one of our biggest problems is people thinking (Fuel the Fight) is a scam,” Ilan said. “I feel like the actual photos of us getting the job done helps prove that the money is going straight into what we’re promising.”

Sanford said even $5 or $2 donations can add up quickly.

Ilan said the team was really excited to work together because they all love each other and wanted to make an impact on the Austin community.

“If I can help show someone, like the front-line workers, that I’m thankful for what they’re doing, I would do whatever I could,” Ilan said. “I’m also simultaneously helping a community that I love and that’s given me so much. I would do anything for Austin.”