RAs lost their homes, jobs due to the coronavirus. Some felt helpless when UHD didn’t inform them about pay cancellations. 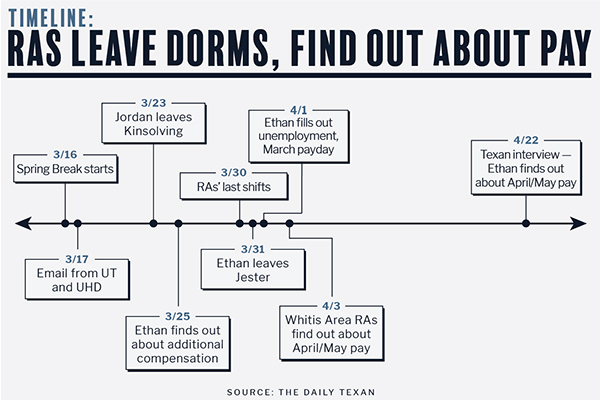 Editor’s Note: The names of the resident assistants have been changed to protect their identity.

The morning of payday, Ethan applied for unemployment. He wasn’t sure if he’d end the day empty-handed or with a check.

Two days prior, he’d worked his last shift as a resident assistant. The day before, he’d emptied his room in Jester Center and gone home. Losing both his home and his job didn’t come as a surprise, but it was still hard to swallow.

On March 17, Ethan received the campuswide email announcing dorm closures and the transition to online classes. That night, all on-campus RAs received an email from University Housing and Dining saying their last shift would be on March 30. The email gave information about checkout procedures and emergency housing, but it said nothing about how or even if they would receive their stipend for the rest of the semester.

RAs are required to regularly communicate with their residents, work desk shifts and organize programs. In return, they receive free housing for the year and a stipend of $284 per month. Each dorm has at least two supervisors who help oversee RAs.

Some RAs say information from UHD administration during the coronavirus pandemic has been limited, and communication from superiors has been inconsistent. This has led to some RAs finding out about April and May pay cuts weeks before others, as well as misunderstandings about when they were allowed to leave campus.

Finding out with the crowd

“We had seen a lot of other schools (closing dorms), and so we were having conversations around what that might look like for us,” Voyles said.

UHD found out about the official decision from the campuswide email on March 17, University spokesperson Shilpa Bakre said in an email.

Jordan, an RA at Kinsolving Residence Hall, said her supervisor told her dorms would not be closing after attending a meeting with UHD administration a few days prior to the dorm closure announcement.

Jordan said not knowing about the discussions made doing her job difficult because she didn’t have answers to the questions her residents were asking.

“As a student employee, to be reassured that there is zero possibility of anything like that happening just to turn around and hear it from President (Gregory) Fenves instead of our own department is quite frankly extremely disrespectful,” Jordan said.

After the initial shock, Jordan spoke with her supervisor and was given permission to leave March 23, seven days before her last scheduled shift.

On the other side of campus, Ethan said he and other Jester RAs felt they weren’t given the choice to go home. They didn’t know RAs from other buildings had been allowed to leave.

Voyles said the email sent to all RAs on March 17 specified RAs were supposed to work until March 30, but they could communicate with their supervisors if they wanted to leave before then.

“We recognize (that) some RAs, maybe they were away and they weren't able to come back (after spring break), or they weren't comfortable (working),” Voyles said.

While Jordan said overall communication from UHD has improved this year, this felt like a step backward, and the lack of transparency about job security in this situation felt manipulative.

“It's scary to be expected to work when you are just a kid, not an emergency personnel,” Jordan said. “I definitely think a lot of people (feel) like they were manipulated into staying because they didn't know how to ask to leave.”

Both Jordan and Ethan said more information should have come directly from UHD administration.

On April 1, RAs were paid their regular stipend from UHD for their work in March.

On April 3, Jordan and other RAs in the Whitis Area received an email from a superior saying they wouldn’t be paid for April and May. But Ethan said he didn’t receive an email from his superior and learned he wouldn't be getting paid during an interview with The Daily Texan on April 22.

Voyles said RAs were notified of the pay cancellation in the March 17 email, but both Ethan and Jordan said this was unclear.

The email, given to the Texan by UHD and sources, does not explicitly mention pay or paychecks.

Voyles said the decision to not pay RAs was made in accordance with University unemployment guidelines. However, Bakre said in an email that the policy decision is left up to individual units.

RAs who worked shifts from March 18 to March 30 were given additional compensation for the hours they worked, Voyles said. The rates were the same as when housing is closed, like during winter break.

Despite asking supervisors for information over GroupMe, Ethan said RAs didn’t find out about the additional compensation until March 25.

“Those are still relatively low wages considering the risk that we have working the desk when there's a lot of people around,” Ethan said. “It was a weird situation because we didn't think we had any choice of leaving.”

At that point, Ethan said he and the other RAs weren’t sure if they would be paid their stipend for the month of March on top of the additional compensation. They also didn’t know if going home would put their fall employment in jeopardy, Ethan said.

Voyles said hiring decisions for next year were made in December, and RAs’ job security would not be affected by their decision to leave campus.

“A lot of RAs are RAs because they are low income,” Ethan said. “A lot of us are financially not as secure to be able to throw away two months of income.”

Ethan and Jordan said they understand the reasoning behind the pay cancellation but are frustrated by UHD’s lack of transparency and feel lost in the process.

“It would be very expensive to pay all these (RAs), so it's not that I don't respect the decision,” Jordan said. “It's just that we found out so late. I wish the communication process was better because that's about $500 that we won't see.”