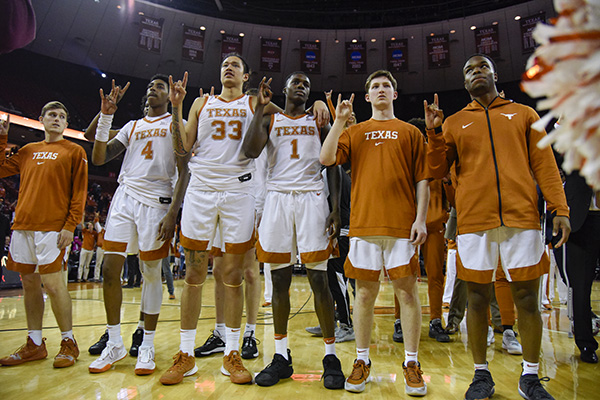 It’s been popular to characterize Texas men’s basketball season as a roller coaster, but there is no better way to phrase it. A major part of the team’s issues was forward play, where the Longhorns’ options consisted of a rotating group from which nobody was able to find footing. Almost two weeks ago, a solution may have been found for next season.

Greg Brown III, five-star Vandegrift High School forward, committed to the Longhorns on April 24, filling the last remaining scholarship spot available and defying expectations by spurning both overseas options and the upstart G League program. To many Longhorn fans, Brown offers stability that will be critical for the Longhorns as they try to work their way back to the 2021 NCAA Tournament. So what is Texas getting from their lone recruit in the 2020 class?

Standing at 6-foot-9 and a shade under 200 pounds, Brown is a tailor-made athlete who can most likely play either forward position or even some small ball center. He’s an outstanding leaper who is an elite vertical lob threat in the half and full court. Brown is slightly lacking in strength, but his frame inspires confidence he could put on muscle. In terms of both speed and lateral movement, he is fluid for his size.

Brown should excel as a finisher with the Longhorns in a variety of mediums, whether it be as a transition threat, pick-and-roll finisher or cutter. I’ve already touched on his potential in transition, where his speed and verticality makes him frightening for opponents. In the pick and roll, he needs to be more physical as a screener, but once he gets out of his break, he has the ability to finish almost anything.

His potential as a cutter is evident. However, he is not always looking to make those plays and will need to learn how to consistently be aware of when to make those reads, especially if Brown is expected to play off the ball. Moreover, Brown provides boundless energy on the offensive glass, constantly cleaning up missed shots with putbacks.

Brown’s shot is not at a high level in terms of consistency, but it has promise. His upper body mechanics are smooth and consistent, allowing him to make a decent number of self-created shots off the dribble, specifically when he is not fully balanced. The issue is there are a decent number of shots where he is not consistent in his lower body. Specifically, his landing point seems to change rather frequently. While there is no guarantee Brown’s shot will be completely fixed next season, there is optimism that it could eventually turn into a strength.

Brown’s handle is definitely one of his largest weak spots, and is something he will need to improve significantly. He’s probably not going to use it much with the Longhorns due to their reliance on guard pick and rolls. But he will need that basic skill if he wants to take that next step as a player during his time at Texas and beyond.

There’s not much to Brown’s passing. It’s not a weakness since he doesn’t make too many mistakes, but it’s not a strength as he’s rarely been in a position to make those mistakes. Brown is fine making simple reads and decisions, but it is likely not a good idea to trust him with anything more early on. In the few opportunities where it did happen, it was a mixed bag of results at best. Thankfully, Texas’ guards take up a high percentage of the offense’s usage, so there will likely be few opportunities for Brown in this regard.

Brown is a solid defender who covers ground well laterally for the most part, and is able to beat players (such as 2021 top-five recruit Jonathan Kuminga) to spots. His angles need some fine-tuning, but he will likely be in charge of guarding the top wings in the Big 12. Brown is currently able to be bullied into the basket, but lowering his center of gravity should fix that to some extent, and his quickness helps him mitigate some of those concerns.

Like most elite high school players, Brown is not always engaged off ball. However, his instincts offer hope, especially when you consider Shaka Smart’s defensive coaching.

Brown should excel as a rim protector in tandem with junior forward Jericho Sims. Brown does a great job of anticipating shots both on and off the ball, and he times his blocks both on and off ball about as well as a high school forward can.

Brown is a forward with untapped athletic potential. All the tools are there, but it’s up to both him and the Texas coaching staff to make sure the skills come around next season.