The Daily Texan • May 7, 2020 • https://thedailytexan.com/2020/05/07/uts-first-african-american-aerospace-engineering-professor-works-to-promote-inclusion/ 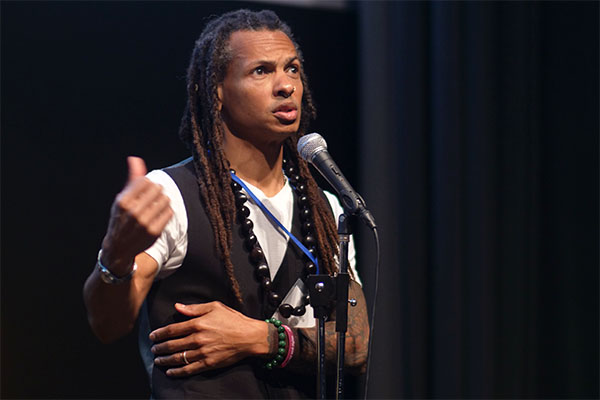 Moriba Jah was hired in 2017 as an associate professor of Aerospace Engineering and Engineering Mechanics at UT. On Feb. 18 of this year, he learned he’s the first African American in the position.

According to the Texas Tribune, 13 out of 162 employees at the Cockrell Engineering School are Black.

In his three years on campus, he said he’s worked to promote inclusivity for all students within the engineering field.

“The more diverse the opinions, the better you can take all these things into account and come up with improved solutions that work for a larger number of people,” Jah said.

Jah began his career as a security guard for nuclear missiles in the Air Force. In his work, he noticed the lights in the sky and began to realize they weren’t stars, but space junk.

After his enlistment, he enrolled at Embry-Riddle Aeronautical University and studied aerospace engineering. When Jah was in undergrad, he said his identity affected his experiences.

“I feel that throughout my process to a very great extent, I had a lot more challenges,” Jah said. “I felt I had to prove myself to be much, much better to other folks to get the same sort of opportunities.”

Now that he’s older, he said he doesn’t feel the same pressure to prove himself. Still, in his classroom, Jah said he hopes to prioritize diversity.

“One of the things that I want to try to get across to all the students that I teach is to realize that there are many different perspectives to approach a problem,” Jah said. “The really challenging problems can’t be solved by a single person or single entity, you have to collaborate.”

However, Jah believes diversity alone is not enough. Instead, he said the University should work toward more inclusivity.

Jah said he tries to create an inclusive environment by encouraging students from all backgrounds to pursue their interests.

Ph.D. student Apoorva Karra said she works with Jah on research about aging of space objects. She looked for opportunities to work in the field, but because she didn’t have a background in that area, she was turned away by other professors before meeting Jah.

“(My administrator associate) pointed out that Dr. Jah really appreciates an underdog, and that’s how I ended up talking to him,” Karra said.

Outside of Jah’s classroom, the Cockrell School of Engineering is in the process of developing new strategies to create a more inclusive environment, said Christine Julien, Cockrell’s assistant dean of diversity, equity and inclusion. This includes graduate student mentoring and outreach to historically Black colleges and universities, and high schools in communities that the school has historically received few applications from.

“I think that we’ve made strides,” Julien said. “They’ve been small but meaningful, and we still have a lot of work to do.”

Jah and Julien both said to promote diversity and inclusion, it is important to create role models for underrepresented groups to show that they can have a future in STEM.

“We actually need to go to these communities in these neighborhoods and show these potential students that the face of science and technology is not one but many,” Jah said. “I think that diverse people need to be empowered and encouraged to have positions of influence.”