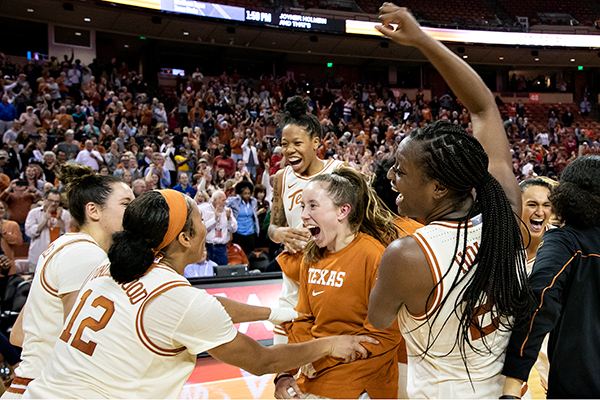 Once Elena Lovato discovered head coach Vic Schaefer would be leaving Mississippi State to take over the Longhorns, she didn’t have to think twice about joining him in Austin as the new assistant head coach for Texas women’s basketball.

“I was minding my business, playing with my nieces, and Coach Schaefer called and mentioned that Texas had inquired about him,” Lovato said in a virtual press conference Thursday afternoon.  “And he was like, ‘You would pack up and go to Texas, wouldn’t you?’ And I said, ‘Coach, are you going to Texas? Because if you’re going to Texas, I’m going to Texas.”

Lovato is just one member of Schaefer’s Mississippi State coaching staff who made the move over to Texas. While Schaefer’s staff has stayed mostly intact, they had to fill holes on the roster and figure out what their needs at Texas looked like.

Senior point guard Kyra Lambert, who announced her transfer to Texas from Duke in April, is a player Lovato said the staff had been recruiting before Schaefer decided to make the move to Austin. The staff was fortunate that both Lambert and junior forward Lauren Ebo — formerly of Penn State — were open to making the move as well, Lovato said.

As for Texas’ returning roster, Lovato has been impressed with junior center Charli Collier and sophomore guard Celeste Taylor.

“You can just tell that they’re hungry,” Lovato said. “Charli and Celeste are ready, like they want to be on campus today. They want to start working toward that championship now.”

Lovato said she hopes the staff can have at least one summer session with the team in July, and with the NCAA now allowing football and basketball athletes to return to campus for voluntary workouts starting June 1, that could be a possibility.

Even as the COVID-19 pandemic persists and practice time is limited, Lovato said the team has to be ready.

“They need to be strengthening and conditioning right now, like hard core, because we are tough and demanding,” Lovato said. “So they’re going to have to have a solid base when we start in August.”