Student-athletes are calling on UT to drop ‘The Eyes of Texas.’ Here’s what former athletes say 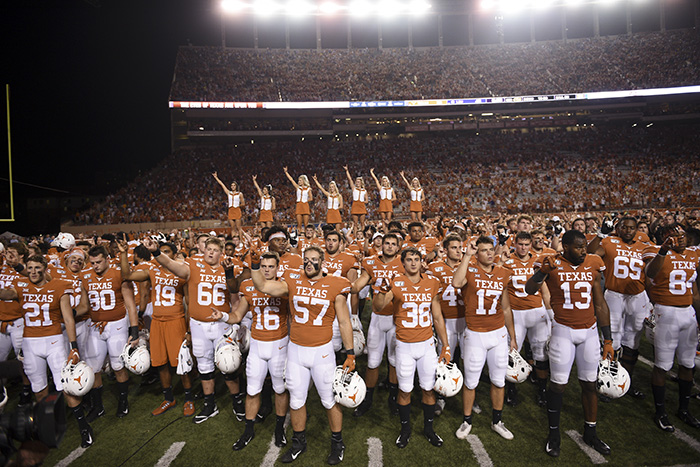 Throughout her four years at UT, Celina Rodrigo sang “The Eyes of Texas,” dozens of times.

But the 2016 women’s basketball alumna said she was later shocked to learn of the University’s historic alma mater’s racist origins and its lyrics’ association with Robert E. Lee, a Confederate commander.

“Somebody had told me one time … ‘You know “The Eyes of Texas” is (tuned) to the railroad song right?’” Rodrigo said. “But the first thing at orientation (is) you’re forced to memorize the song.”

Now, 84 years after it was adopted as the official school song, Texas student-athletes are calling for change. Last Friday, more than three dozen UT student-athletes posted a coordinated statement on social media with requests for the University that included renaming buildings named after racist figures and removing “The Eyes of Texas” as the school song.

Rodrigo said the current movement, sparked by the police killing of George Floyd in Minneapolis, has empowered student-athletes to speak out in a way that many former athletes say they have never seen before.

“This has allowed them to use that platform to push for change,” Rodrigo said. “I don’t think it would’ve happened if all of this had not been going on. … It’s forced people to make a decision.”

Longhorn basketball alumnus Eric Davis Jr. said the possibility of changing “The Eyes of Texas” was regularly discussed among Black student-athletes during his time at Texas from 2015-2017, but they were hesitant to speak up due to a lack of public support.

“It was kind of hard because you didn’t know who had your back or who was going to speak up,” Davis said. “I needed the scholarship. I wanted to play ball. You don’t want to be shunned out, and you don’t want to be blackballed. It’s a lot that goes through your mind.”

During his tenure as a student-athlete from 2015-2019, former Texas hurdler and wide receiver John Burt said he stood and sang “The Eyes of Texas” at more than 50 football games and numerous track events. Although Burt became aware of the song’s usage in minstrel shows, he said he was able to put aside its history. However, he said he supports the current student-athletes and their requests.

Burt said that while he’ll keep singing, he agrees that nobody should be forced to sing it. He also said that this was the first time he’s seen the two teams he played on agree on one unified message.

“Different groups of people are going to have different ideas, ideologies and feelings on certain things,” Burt said “This is one thing that I’ve seen that both groups have agreed upon, as well as all the other sports.”

In response to the national outrage over police brutality — and the requests by the student-athletes and other members of the UT community — Interim UT President Jay Hartzell said in a statement Monday that he has begun “scheduling conversations” to address these ideas.

While the idea of removing “The Eyes of Texas” as the school song has caused polarization among the Longhorn fanbase, 2019 men’s basketball alumnus Dylan Osetkowski said he thinks it’s time for a change.

“I don’t see what’s wrong with starting a new tradition,” Osetkowski said. “Changing ‘The Eyes of Texas’ isn’t going to change the University. Why can’t this song completely change and change the dynamic of the way student-athletes, fans and alumni feel about this song as a whole?”