Students take action for Black Lives Matter in their hometowns 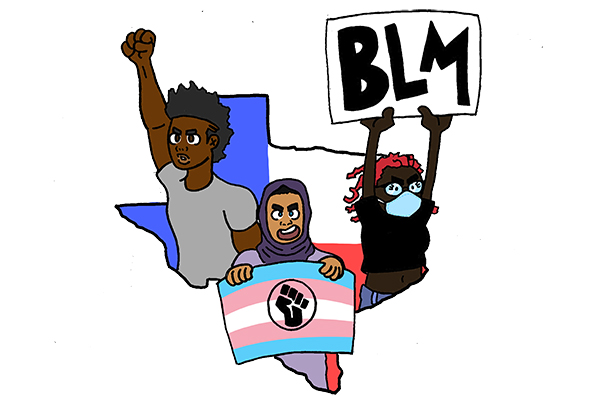 Students have started fundraising and organizing protests to support the Black Lives Matter movement from across the state. After classes transitioned online due to COVID-19 concerns, some students moved back to their hometowns and now have started participating in local activism.

Government and humanities junior Hannah Garcia has raised money through art commissions she does from her hometown of San Antonio. She received about 40 requests for commissions, raised around $600 and donated the proceeds to Black Lives Matter and the Mutual Aid Collective ATX, a student-founded community organization that assists Austin citizens in need.

Garcia said it is important to uplift the voices of Black creators, which she has been doing through her Instagram account. She said she is inspired by artists Lo Harris and Bonnie Brown, who create content including paintings and illustrations.

“I thought it was a really infectious way to encourage white creators to use their arts and their creations for good,” Garcia.

“We're going to try to recruit kids our age, young adults to get involved in local politics specifically, and call different representatives, especially in our town,” Meador said. "Rural America is listening. Rural America is passionate about the same things that the cities are protesting.”

Meador said hundreds of people showed up to two protests in San Angelo against police brutality.

“We wanted to start (the phone bank) because we saw an interest and a passion in young people in our city, in our small town and in our very red congressional district,” Meador said.

Long said Highland Park has a reputation for being affluent and racially homogeneous, which made him appreciate young residents’ enthusiasm in attending the rally. He said he talked about the meaning of allyship.

“Allyship goes beyond the performative things on social media or a trend,” Long said. “It's important for us to continue taking action and just encouraging them to keep going, even when it gets tiring.”

Long also planned a rally on Juneteenth in his hometown of Duncanville with other alumni from his high school. He said his community has suffered from systemic racism as a result of inequities in education.

“A lot of students from (our) high school don’t necessarily have the opportunity to go to college like a lot of us in the top 10% do,” Long said. “It’s not an overwhelming majority, compared to Highland Park or schools in that area.”

Long said engaging with small communities makes it easier to have a tangible impact since larger cities like Austin have more barriers to getting things done.

“Just because you're in this small community (that) might be a little bit more away from the city, it doesn't stop you … from being concerned about the situation,” Long said. “At the end of the day, this isn't just an issue based on Minneapolis or what's happened in Dallas or Atlanta or Ferguson.”