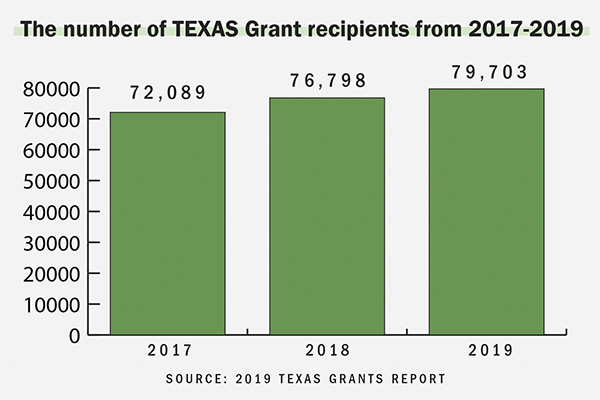 Tuition and fees at public universities and the increasing number of eligible students have outgrown the TEXAS Grant program’s ability to cover recipients’ tuition and fees, according to the 2019 TEXAS Grants report.

TEXAS Grant is a need-based state financial aid program funded by the Texas Legislature. There are four pathways through which students can qualify initially for the grant: high school graduation, honorable discharge from the military, receiving an associate’s degree and being a transfer student with a Texas Educational Opportunity Grant, according to the College for All Texans website.

The Texas Legislature approved $786.4 million for the TEXAS Grant for 2018 and 2019, according to the report. “TEXAS Grant funding is appropriated to the (Texas Higher Education Coordinating Board) and then allocated among public universities and health-related institutions,” the report says.

Institutions are required to cover any tuition and fees that are not covered by a students’ TEXAS Grant award. Institutions may award non-loan program funds to the students to fill in the gap, according to the 2021 TEXAS Grants program guidelines.

“As tuition increases (in institutions), then there is additional burden on institutions to make sure that they can cover the gaps for students, between TEXAS Grants and other aid,” Texas Higher Education Coordinating Board commissioner Harrison Keller said.

The average award amount in 2019 covered 54% of the average amount of statewide tuition and fees, according to the report.

“The gap between the amount of tuition and fees owed and the amount of the students’ TEXAS Grant awards continues to grow, requiring institutions to devote increasing amounts of institutional resources to close this gap,” according to the report.

The number of students who are able to receive a TEXAS Grant is based on the legislature’s appropriation every two years, Keller said.

“This is an ongoing concern,” Keller said. “Of course, financial needs continue to grow. Currently, the case is that not every student that might potentially be eligible for a TEXAS Grant is able to receive a TEXAS Grant.”

About 25% of associate degree students qualify for a grant, and 3.3% received one in fiscal year 2019, according to the report. The report said the percentage of TEXAS Grant recipients in the associate degree pathway lags behind the amount of eligible students.

In fiscal year 2019, the board recommended institutions assist as many students as possible by awarding $5,000 “target amounts” for the year instead of the maximum amount allowed in the statute, according to the report. The maximum amount was roughly $9,300 for the year for public universities, according to the 2019 TEXAS Grant program guidelines.

“UT Austin continues to expand its financial aid and scholarship programs through efforts such as Texas Advance Commitment, and TEXAS Grants will continue to play a critical role in helping the University close the gap between tuition and need for Texas residents,” Todd Sprague said.

Keller said the discussion of statewide financial need will be in one of the “most important” higher education policy conversations in the next legislative session.

“We need to ensure that qualified students will be able to participate in our public colleges and universities,” Keller said.