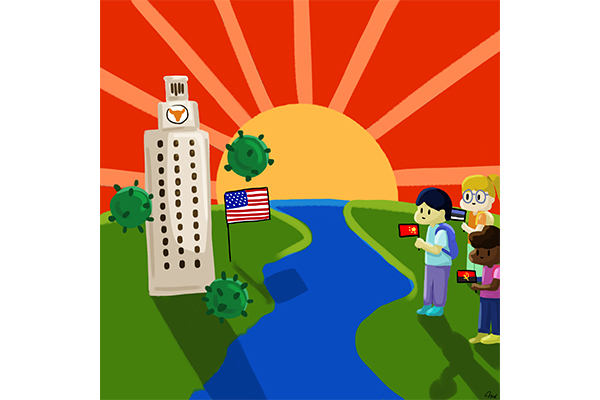 As Norman Wang drove from the Pudong International Airport to his house in Shanghai, the economics junior welcomed the sight of congested traffic, full restaurants and crowded streets, something he’d missed while living in Austin.

As of Monday, July 27, the United States is second only to Brazil in new per capita coronavirus cases per week. Some international students like Wang said they wanted to return to their home countries where life more closely resembles what they knew prior to the pandemic.

However, the constant policy changes imposed by the U.S. government and U.S. Immigration and Customs Enforcement have made it challenging for nearly 5,000 international students on campus to find stability.

“We’re not from here,” economics and civil engineering junior Santos said. “A lot of us don’t have family here or a place to stay. It’s scary having all this uncertainty in a foreign place.”

When ICE’s decision was later rescinded on July 14, University spokesperson Joey Williams told The Daily Texan that the University supports international students and will continue moving more fall classes to a hybrid format.

Originally, Santos wanted to return to his family in Angola, but decided the risk was too high.

Santos has a two-year F-1 student visa, which will expire in the fall. Though he plans on renewing it, he worries the process will take longer because of coronavirus delays, and he will be barred from reentering the U.S.

He is currently staying with high school friends in Florida and will return to Austin for the fall semester.

Wang, who also has an F-1 visa, stayed in Austin after campus closed. Earlier this month, he returned to China and will remain there for the fall semester.

“There’s no right answer,” Wang said. “Whatever I feel might be the right decision today, may feel wrong tomorrow.”

Even if  Wang wants to change his mind and return to Austin, he may not have a choice.

“The travel ban on Chinese citizens still hasn’t been lifted,” Wang said. “As a Chinese citizen, I can’t fly directly to the U.S. from China. I have to find a third country to quarantine in for 14 days before returning to the U.S., which is super time consuming and costly.”

Emma Liisa, an international relations and business sophomore, has been in Estonia with her family since June. Originally, she planned to stay because COVID-19 cases have dwindled to only a few per day, making masks obsolete and allowing the country to return to normal.

“All the fun aspects of college, like football games and social gatherings, are surrounded by paranoia, so I (would) rather stay (in Estonia),” Liisa said.

In early July, Liisa decided to return to Austin for the fall because she was unable to sublease or break her contract with the Scottish Rite Dormitory.

Though the July 6 ICE announcement requiring international students to take at least one in-person class was reversed, Liisa said she is still checking her schedule every day in case the decision changes.

Though the changes don’t apply to UT at this point, Liisa said in an interview prior to the Friday announcement that international students like herself worry about keeping up with constant changes in policy.

“I think international students just want security and certainty that they won’t be uprooted during the semester,” Liisa said.