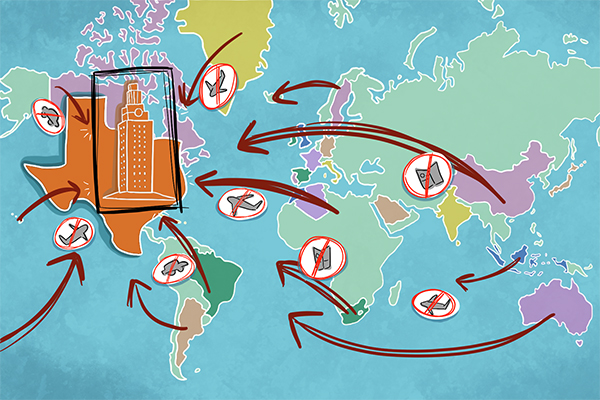 This fall, Bhavya Shukla will start her class day as the sun sets. Since Shukla lives in Singapore, which is 13 hours ahead of Austin, her classes will start around 9 p.m. and end around 3 a.m. daily.

After the summer brought embassy closures, travel restrictions and visa regulation changes caused by the pandemic, some international students will be studying from Austin this fall. Others will be in countries across the world. Since travel remains difficult because of global travel advisories and closed borders, students in different time zones face odd class schedules.

Economics freshman Shukla said she realized midsummer that going to campus was impossible. Even though she said she would be able to get a visa, she decided to stay home because of the extent of the virus within the United States.

Shukla said she will take classes from home but is worried about her ability to focus on her schoolwork because of the time zone difference.

“I have a calculus class from 2 a.m. to 3 a.m.,” Shukla said. “Calculus requires a lot of attention … and I don’t know how to focus during those times. That’s one of my biggest concerns because I actually need to do well in calculus (for my major).”

Over the summer, U.S. Immigration and Customs Enforcement released guidelines that would have required students on F-1 visas to take in-person classes in order to maintain their visas. These guidelines caused anxiety and confusion in the international student community at UT and were later rescinded.

Shukla said restrictions such as the ICE guidelines are part of larger uncertainties for whether she can attend school in person during the pandemic.

“I’m still not too sure if I’ll be coming (to UT) next semester,” Shukla said. “I don't know if things are going to get better. I hope they do because I really want to come on campus.”

Le Dang Khoa Pham, a civil engineering freshman from Vietnam, will live on campus this fall. Pham said he attended high school in Texas, where he lived in a school dorm, and he is currently staying at a friend’s house. He said he has not been able to return home to Vietnam because travel from the U.S. has been restricted.

Pham said he is excited to start at UT in the fall, and he tries not to think too much about the changes brought on by COVID-19.

“I don’t want to be too worried (about what’s happening),” Pham said. “I’m very optimistic. I’m still worried, but I just want to relax and don’t want to be caught up or drained of energy all the time. Things will get better.”