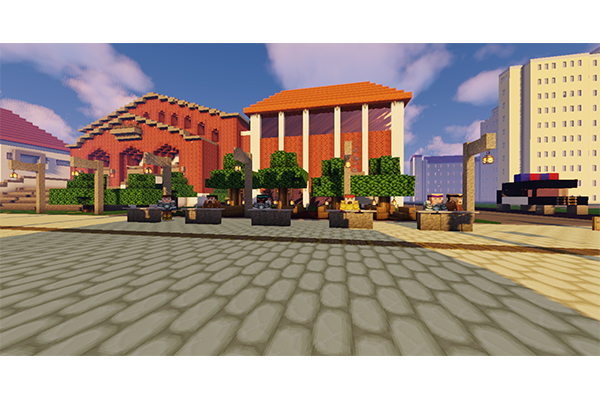 Chemistry senior Josh Fowler built a virtual replica of the University campus in Minecraft to stay connected to other students during quarantine, attracting the attention of over 200 Reddit users in August.

Fowler said he led a team of gamers to build the virtual campus in March and shared his creation on the UT subreddit with the caption, “Missing campus? Come help build it!” The initial build took two weeks, but students have continued to add to the server over time.

Fowler said the server started as a pastime to combat lockdown boredom and transformed into a detailed and expansive replication of UT that connected students. Now, the virtual campus sprawls from Gregory Gym across multiple academic buildings and the Six Pack to the UT Tower. The server, which can be found on Youtube, even includes the Texas State Capitol.

Fowler said it features small details that make campus special, and students have said they were impressed with the server’s details, including organizations tabling on Speedway.

“One thing we tried to add was lots of details and even some Easter eggs, like an albino squirrel, an area to remember past Bevos and a working police button,” Fowler said.

Fowler and his team of 4 to 5 students used Google Earth satellite imagery to ensure their map of campus was accurate. Other students have replicated the campus in Minecraft using Google Earth, according to previous reporting by The Daily Texan.

English sophomore Molly Awalt said she has used Minecraft as a way to connect with her friends and entertain herself throughout quarantine. Awalt said her favorite part of the UT server was recognizing specific buildings from her time on campus.

”The creativity the game allows is a wonderful outlet in these times,” Awalt said. “Being able to interact in a virtual world that resembles UT Austin’s campus can encourage togetherness while many of us are apart.”

Evelyn Cai, a business honors and finance sophomore, said student bonding through organizations will be harder this semester because in-person meetings will be limited. Student org guidelines regarding safety protocols and in person meetings are currently being finalized and will be released as classes begin, according to the Protect Texas Together website.

“It’s definitely great to have all my friends in one city again,” Cai said. “But we all have to understand that we have to be careful about where we go and who we expose ourselves to. There is an undercurrent of caution that didn’t exist previously.”

Students can build more on the server or “walk” down Speedway while sitting at home, Fowler said. He said he aimed for the server to connect students and replicate the normal campus experience.

“I thought a server might be a fun way to bring people together,” Fowler said. “The server will allow students — both on campus and those that weren’t able to return — to feel a sense of togetherness and community Zoom meetings can’t provide.”