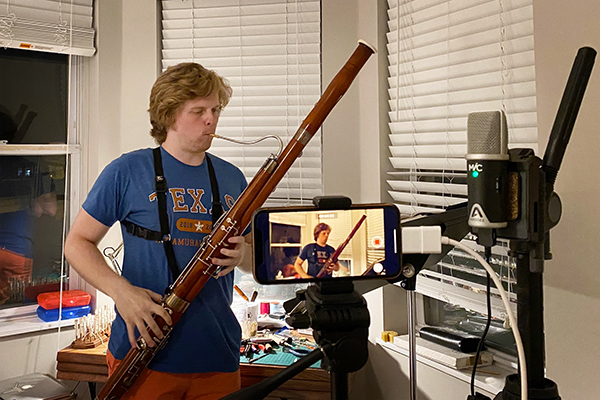 Derek Ji envisioned his senior year at UT as an idyllic “last hurrah” with his college friends — attending football games and absorbing the energy of being a Longhorn before starting a full-time job.

Instead, he will spend the fall semester Zoom-ing into class from his childhood home in Plano, Texas.

Almost half of UT’s students will take their classes fully online this fall, according to a University news release. Some students who, like Ji, decided to spend their fall semesters in their hometowns, say they made that choice because they were worried their peers would not follow COVID-19 health guidelines.

“It’s a matter of priority,” said Ji, a management information systems senior. “It would be fun to go back (to Austin), but … I would probably be uncomfortable, even if I was having fun. There would always be that burden on my mind (of getting sick), and that stress isn’t worth it.”

In the past week, the University of North Carolina at Chapel Hill and the University of Notre Dame both switched to being fully online after outbreaks of COVID-19, according to The Daily Tar Heel and NBC News. Ji said the recent transition of UNC verified his decision to stay home.

University spokesperson J.B. Bird said UT is emphasizing remote learning, which will help safeguard the community’s health. He said the fall plan was made to meet students’ needs, not financial concerns.

“Our academic planners, who worked with students throughout the process, had the students front and center in their minds as they went through scenario planning to explore a variety of different options for the fall,” Bird said in an email.

Bassoon performance junior Davey Hiester, who plans to stay home in Philadelphia this fall, said he takes the risk of contracting COVID-19 very seriously, as his lungs power his  aspirations of playing the bassoon for a living.

“When tens of thousands of 18 to 22 year olds who haven’t seen each other in half a year all come back together, can you realistically expect necessary precautions to be taken?” Hiester said in a Twitter message. “As much as I believe in my peers, my answer is no.”

Celeste Valdez, a human development and family science sophomore, will attend this semester from home in south Texas. Valdez said “inconsistency from the administration” in handling the fall semester and the decision to continue with the football season has made it difficult for her to trust the University.

“It was a hard decision, especially because I will still have to (pay) rent for an apartment (in Austin) while I stay home,” Valdez said. “In the end, it’s the smartest and … safest decision for me.”

From her bedroom in Dallas, Angelina Braese, an international relations and global studies freshman, said she would like to be on campus, but worries about losing money on housing. If she had gone to campus, she thought she’d be forced to return home soon after the fall semester began.

“Everyone has their freshman fall, it’s their first time leaving the house…(having) independence for the first time in their life,” Braese said. “That was taken away from me.”