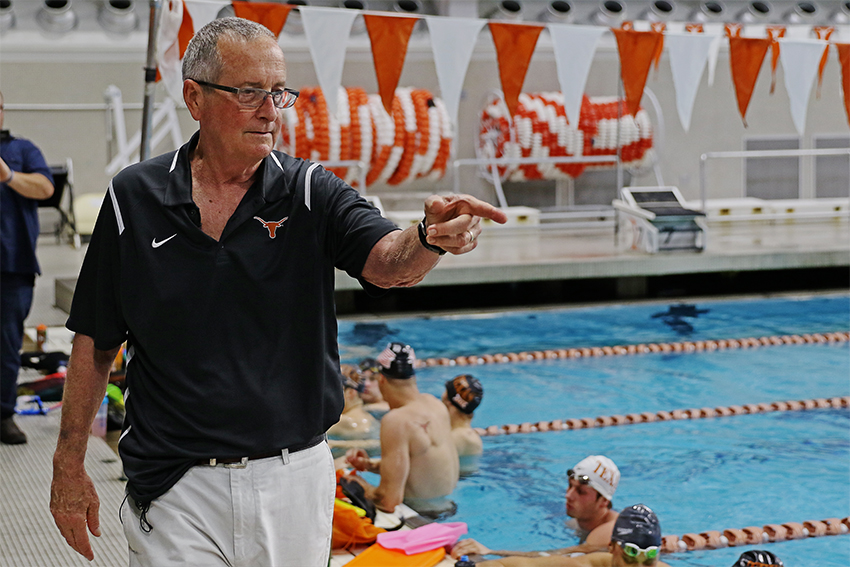 On Wednesday, Texas unveiled the new Eddie Reese Outdoor Pool, named in honor of the longtime head coach of the men’s swimming and diving team.

The pool, which provides a space for Longhorn swimmers to train outdoors, sits next to the Lee and Joe Jamail Texas Swimming Center and consists of 10 short course lanes that can be converted into five long course lanes. It also includes new team locker rooms and a team lounge.

Reese, an eight-time NCAA Coach of the Year and member of the International Swimming Hall of Fame, began coaching at Texas in 1978. Since then, Reese has led the Longhorns to 14 NCAA team championships and 40 straight conference titles.

“I’m still in the sport because I love the sport,” Reese said in a March press conference. “I love what it makes them do. They go to college; they go to class. I get to see them 20 hours a week. They learn a lot of disciplines that will take them further in life.”

Reese began his collegiate coaching career as a graduate assistant at the University of Florida before becoming the head coach of Auburn University. He coached the Tigers for six seasons, turning the program around before accepting the head coaching job at Texas.

“Everybody always wants to know, ‘How many Olympians do you have?’ I don’t know. I just want to make this group better,” Reese said to Swimming World magazine in 2019.

At Texas, Reese has coached 29 Olympians who have won 39 gold medals, 16 silver medals and eight bronze medals. His swimmers have collected a total of 53 individual NCAA championships, 50 national relay championships and 263 All-American selections.

Reese is commonly regarded as one of the greatest coaches the sport has ever seen, with an unmatched track record spanning decades of collegiate competition.

“I never had a goal to be an Olympic coach,” Reese said. “Never had a goal to win NCAAs. I’ve had a passion to get people to help me make them better. When I quit doing that and when they quit laughing at my jokes … I’ll be gone before anybody wants me to go.”