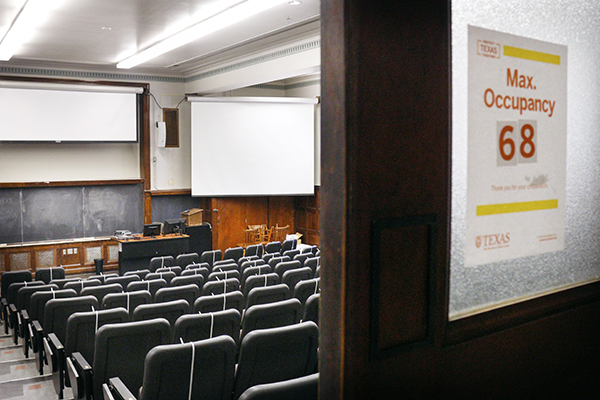 Students and professors ran into roadblocks during in-person and virtual classes throughout the first week of the semester, breaking social distancing guidelines and confusing students.

Contemporary Moral Problems, a 79-person on-campus class in the Department of Philosophy, expected a maximum capacity of 86 people for a classroom on the first day. Instead, the lecturer and students arrived to a 53-person maximum capacity room, said David Ochsner, director of public affairs for the College of Liberal Arts.

Math sophomore Esha Ali said she arrived late and had to remove a zip tie from a seat to have a place to sit.

“It was awkward because (I) couldn’t figure out where to sit without accidentally bumping into the other students who were already seated,” Ali said.

The philosophy course has been relocated to a different classroom for the rest of the semester, Ochsner said. Ochsner said the instructor’s actions were appropriate due to the changing capacity of the classroom. The instructor declined to comment.

“If instructors feel their classes are above capacity, they should notify their department contact before removing the zip ties,” said Kathleen Harrison, communications manager for the Office of the Executive Vice President and Provost. “The instructor did contact the registrar to verify that this was the assigned room before removing the coverings.”

For virtual classes, many students experienced difficulties with the 300-person maximum meeting capacity on Zoom and were unable to enter their virtual classrooms.

Industrial design freshman Sreevarsha Chinthapenta has a cultural anthropology class with a 300-person maximum capacity, though there were more than 300 students enrolled in the class. Chinthapenta said although she was able to get in the class on time, it must have been frustrating for students who couldn’t.

“The professor noticed this and decided it would be best to send the recorded session to all students and upload the lecture for those who missed it,” Chinthapenta said. “I understand that (the professor) didn’t want to spend the entire time trying to figure (it) out and not (be) productive in class.”

The maximum capacity also prevented many Longhorn Band members from entering a band meeting, director Scott Hanna said. Hanna said he contacted UT Information Technology Services, which was able to increase the participation cap for the class meetings and create a webinar format for the band.

“Like lots of groups across the country, we have had a few unanticipated issues as we got started this semester,” Hanna said. “But overall the experience with Zoom has been positive.”