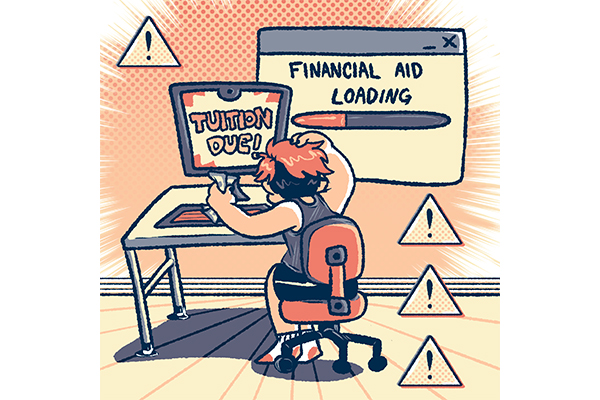 "On the student side, I'm sure there's been an impact felt (by) not being able to come into an office and things like that,” Armes said. “But as far as our side, I haven't noticed a difference. I actually think we're almost more efficient."

Psychology junior Khadijah Iscandri said her experience was stressful and frustrating compared to past years. Iscandri said just days before the tuition deadline, she was told she would not receive her package in time because of incorrect verification paperwork. She said she had two options to pay for tuition: take out a loan or pay out of pocket.

Iscandri took out a tuition loan, and a few days later the tuition deadline was extended to Aug. 25. Iscandri said after she took out the loan, the financial aid office called her back to say her papers had gotten lost, and her financial aid package would arrive soon. Iscandri said she received her aid package days before the second tuition deadline.

The extension was not in response to any potential aid delays but instead was meant to help accommodate students during the pandemic, said Diane Sprague, executive director of the Office of Scholarships and Financial Aid.

Armes said if the financial aid office finds a problem with someone's package, the student will immediately be contacted. She said she is not aware of the CASH page incorrectly showing a student’s financial aid status.

Sprague said there have been no clerical issues with the administration of financial aid. Kathleen Harrison, communications manager for the Office of the Executive Vice President and Provost, said there was only one isolated instance where deposits did not run correctly overnight. The system error was rectified the next morning and aid went out that day, Harrison said.

English senior Allyson Stephens said she received enough money to pay her tuition, but the rest of her aid package has not been deposited in her bank. Stephens, who participates in the UTeach-Liberal Arts program, needs the aid so she can buy a new laptop to teach her upcoming classes.

"I've called financial aid almost every single day,” Stephens said. “I talked to somebody about every other day. Now none of my emails are getting responses, and I'm getting conflicting information. It's really frustrating because I need that money because I can't afford all this otherwise."