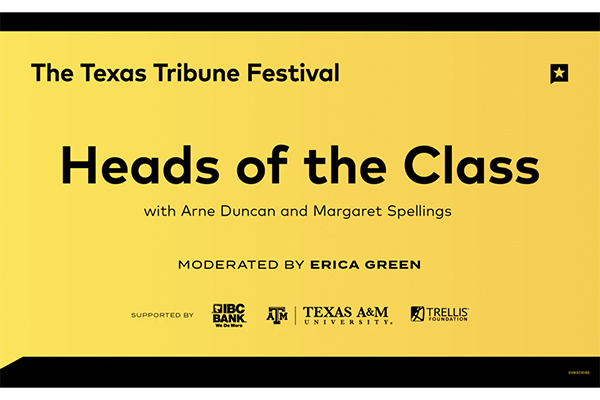 The pair spoke about the impacts of reopening K-12 schools on students and communities in a pre-recorded conversation “Heads of the Class” that aired Monday afternoon as part of the 2020 Texas Tribune Festival.

Spellings, president and CEO of Texas 2036, a nonprofit which conducts research for policymakers, said while the federal government has issued harmful education policies, local officials have stepped up to help their communities.

“Local officials at every level, especially our school people and teachers, (stepped) up and filled that void,” Spellings, who served under President George W. Bush, said. “Frankly, people are not looking to Washington for guidance at this point. They’re trying to figure it out on their own.”

Duncan, who served under President Barack Obama, said the current administration’s efforts were “disastrous” in protecting the safety of students and communities.

“The fact that we have such a high body count around the nation now and the fact that the president and the current secretary tried to bully kids into going back to unsafe environments shows how little they care about whether children, their parents and teachers live or die,” Duncan said.

Duncan and Spellings said standardized testing should be given to all K-12 students to gauge each student’s learning loss since March.

Duncan said he wants to initiate a mass national tutoring program to help students catch up on their learning. This tutoring could help students who don’t have access to virtual learning, he said.

“There are far too many children where school stopped for them in March,” Duncan said. “They didn’t get any more instruction.”

Erica Green, a New York Times reporter and the conversation’s moderator, said the country is facing two pandemics: COVID-19 and racial inequality. Both Duncan and Spellings said it is the federal government’s role to help marginalized people, but the current administration has failed at this.

“It’s the federal government’s role to help those who are vulnerable,” Duncan said. “Whether it’s K-12 or higher education, this administration always chooses to support the powerful and to turn their backs on the powerless.”

“The goal is not to go back to school. The goal is to keep schools open,” Duncan said. “Teachers, schools and students are simply props in their play. They want to see that facade, that things are OK to go back.”

Spellings said higher education institutions and universities are under the same pressures as K-12 schools to keep students safe. Spellings said the unwillingness of some university students to social distance and refrain from partying is “tragic.”

“What we’re learning is it’s hard to entrust our public health to a bunch of teenagers, who often can’t help themselves from congregating and drinking,” Spellings said.