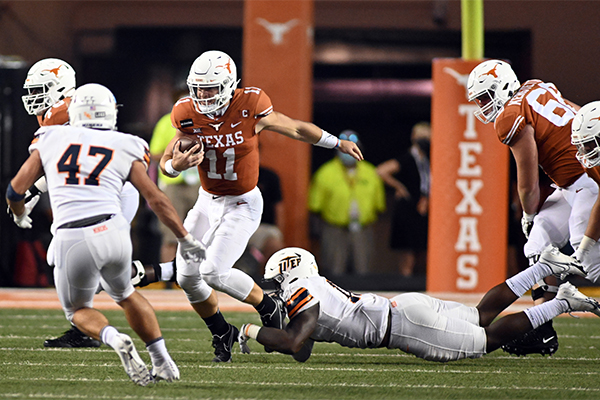 There may have been limited crowds and masks on the sideline, but watching Texas crush the UT-El Paso Miners 59-3 in its season opener Saturday night resembled the closest thing to normalcy the Longhorns have experienced in the last eight months.

Nobody knew what the first game of the season would look like with capacity at Darrell K Royal-Texas Memorial Stadium capped at 25,000 fans, or how the crowd would react to “The Eyes of Texas” being played, or how well the offense and defense would play in new schemes under two first-year coordinators.

Although once senior quarterback Sam Ehlinger opened the season with a 78-yard strike to redshirt sophomore receiver Joshua Moore, the weight of the outside world seemed to fade away. After eight long, uncertain months, the Longhorns were playing football.

“Running out, we had smoke, we had fans, people cheering, the whole nine (yards),” head coach Tom Herman said. “At the end of the day, the only thing different about this game was coaches were wearing masks and there weren’t a whole lot of people in the stands.”

Junior defensive back Caden Sterns was grateful just to be playing. While not having 100,000 fans inside DKR will take some getting used to, it’s something he can live with if it means he’ll get to play a full season.

“Obviously it didn’t feel as normal as (usual), because typically you’ll have 100,000 (fans in attendance),” Sterns said. “You can’t take this game for granted, (because) some people aren’t playing.”

Ehlinger, who broke his career record for passing touchdowns in a single game with five in the first half, was firmly in control of the game from the start. The Texas offense wasted no time in “starting fast,” something first-year offensive coordinator Mike Yurcich emphasized coming into the game, racking up 21 points in the first quarter. The Longhorns led 45-3 at halftime.

Even after a commanding first two quarters, Ehlinger wasn’t satisfied with his 426 yards passing and five touchdowns in the first half.

“To tell you the truth, I'm actually pretty disappointed,” Ehlinger said. “I left a lot of throws out there that I should have made. I left a lot out there, and I’ve got to get better.”

Ehlinger only played one series in the third quarter before being benched for sophomore backup quarterback Casey Thompson. Freshman quarterback Hudson Card made his college debut in the fourth quarter with the Longhorns leading 59-3.

The Longhorns were just as stout defensively, although they weren’t without their miscues. Redshirt junior defensive back Josh Thompson snatched his first career interception as the defense forced six three-and-outs out of UTEP’s 14 drives.

Texas has a bye next week before traveling to Texas Tech on Sept. 26. But if there’s one takeaway Ossai has from the Longhorns’ dominating season-opening win, it’s that he can’t get back on the field soon enough.

“(After a win), you’re anxious, you want to go again,” Ossai said. “Today felt great, game week felt amazing, and you want another (game) right off the bat and it sucks to have to wait. But it is what it is, and we’re going to take full advantage of it.”