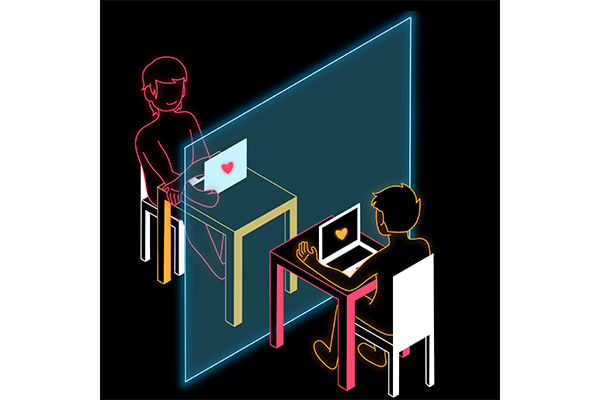 Jordan Blumberg thought she would see her boyfriend two weeks after leaving Austin for spring break in March. Two weeks, however, turned into six months.

“It wasn’t by choice,” said Blumberg, an electrical and computer engineering sophomore. “We had no time to emotionally prepare to be apart, and now we just have to constantly adjust with each new change.”

Blumberg and her boyfriend, Sam Darrow, have been dating for over a year. Six months of their relationship has been long distance because of COVID-19. Blumberg is now living in Denver while Darrow is home with his family in Frisco.

The pandemic has presented unexpected challenges for couples testing their relationships.

“We’re already looking at this as proof of how strong our connection is,” music composition sophomore Darrow said. “With every hardship, we say, ‘Hey we survived five months, we can do a few more.’”

Blumberg and Darrow said an involuntary long-distance relationship feels like an added weight to their COVID-19 experience, but they’re still looking forward to the day when their relationship will be “normal” again.

“It’s easier than, say, a long-distance relationship out of high school because we know there’s an end point,” Blumberg said. “The hard part is knowing when that end point will be.”

To stay connected, Blumberg said they call each other for at least two hours every day and simulate dates through Netflix parties or cooking together virtually. Blumberg said it’s not the same as seeing each other every day in Austin, but it’s the best they can do for now.

Darrow said they also have bond touch bracelets which allow them to tap on the bracelet and communicate with one another through vibrations.

“Even when we’re not able to text or call, or we’re both in class, I can easily tap on my wrist a few times and send her a message,” Darrow said. “It’s like we have our own little language; it makes me feel close to her.”

Distance doesn’t have to be miles apart to be hard. Mechanical engineering sophomore Samuel Wheeler lives in West Campus while Rachel Galassini, an education sophomore and his girlfriend of four years, lives in Jester West Residence Hall.

Wheeler said the no-guest policy at Jester makes it hard to see her, and Galassini limits her contact with others because she is immunocompromised.

“I’m lucky we’re not (both) on campus because we would practically be banished from seeing each other,” Wheeler said. “It’s really hard not seeing her every day.”

“I know it’s nothing compared to a long-distance relationship, but it’s still an adjustment,” Wheeler said. “(We) have to pick and choose when to do things instead of just running into each other spontaneously. It feels like our time together has been cut in half.”

Wheeler said they’ve turned everyday routines into dates to see each other more often. They go to the grocery store, do homework and go on walks together.

“We’re at the point in our relationship where we don’t go on big, fancy dates,” Wheeler said. “We just enjoy the little things now, but I wish we could do more of them.”

Both couples said they’re confident in the foundations of their relationships in withstanding the obstacles attributed to COVID-19.

“It’s comforting knowing you’re doing this with someone that’s just (as) committed to making it work as you are,” Darrow said. “Someone who’s with you through the good times and the tough times.”