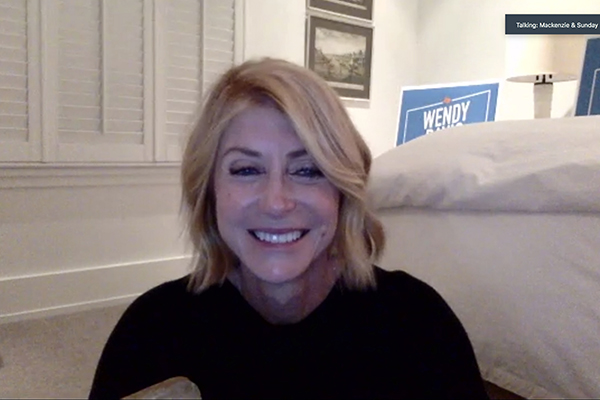 Wendy Davis, District 21’s Democratic congressional candidate, sat down with students on Wednesday to discuss her campaign at the “Pets and Political Participation” virtual event.

The event was open to all UT students and encouraged participants to join alongside their pets. Davis included her black labrador, Ziggy.

The event was organized by Mackenzie Graham, a finance and Plan II junior. Graham said she reached out to the campaign after Davis made a strong impression at an event at the Tejas Club in January.

“Although every single square inch of the Tejas House was occupied by UT students, as soon as Wendy opened her mouth the house fell silent,” Graham said. “People were captivated by what she had to say.”

Graham said she chose the pet angle so students would feel excited, rather than intimidated, to join an event about politics.

“It feels like we eat, breathe and sleep Zoom at this point, and I thought this event would be a fun and refreshing take on the traditional Zoom we are all used to by now (and create) a positive association with pets and politics,” Graham said.

Davis, who is running against Republican incumbent Chip Roy, said her career started when she was a first-generation single mother who graduated college as valedictorian and set out for Harvard Law.

“It’s been such a privilege to take the experiences from my life, the challenges that I had, (to have) the blessing of learning to relate to the challenges that so many people across our country have to fight,” Davis said. “(It’s) as though I'm fighting for that 19-year-old me, who had a kid and was trying to figure it all out.”

Davis said students should vote, take direct political action and hopefully one day run for office. She also asked that they vote in every race, saying she believed her race would be determined by only a handful of votes.

Hailey Hollowell, a Plan II and international relations and global studies junior, said she was eager to attend the event because she believes it is important to stay politically engaged. She said the event made her feel like she was back on campus.

“(Davis) was genuinely happy to see us all, understanding about not having our cameras on and emphatic with the assertion that all of our votes and participation mattered,” Hollowell said. “In other words, politics is for everyone.”