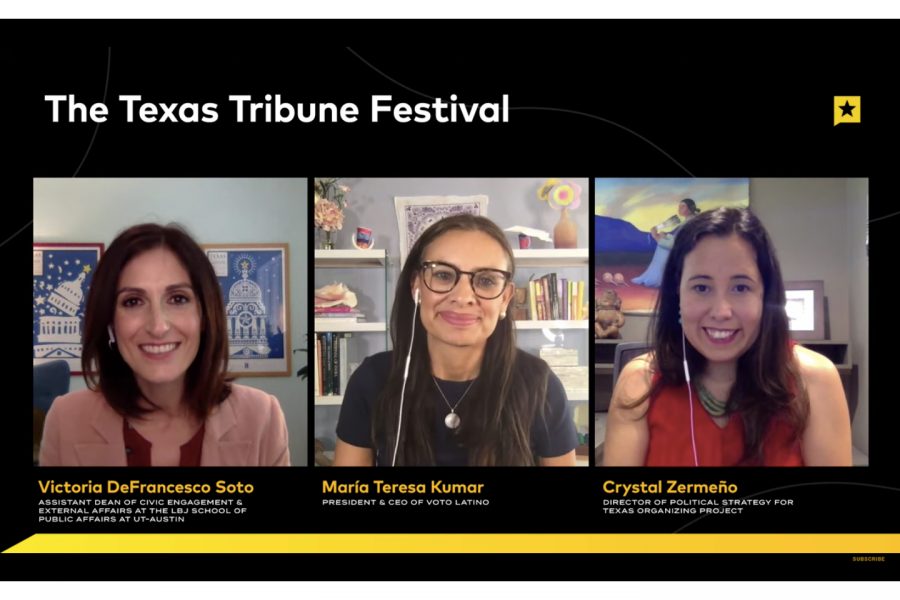 Political activists María Teresa Kumar and Crystal Zermeño are working to mobilize the growing Latinx population in Texas for the upcoming presidential election.

The pair spoke on why Latinx voters will make an important impact in the 2020 election in the prerecorded conversation “Why Latinx Turnout Matters” that aired Thursday morning as a part of the 2020 Texas Tribune Festival. Kumar, president and CEO of political organization Voto Latino, said young voters are the key to mobilizing the Latinx vote.

“(The) tsunami of Latinos turning 18 in every single year started in 2016, and 4 million of them will be eligible to vote this presidential election,” Kumar said. “We don’t expect that tsunami to settle for another decade, so there will be a lot of us really fast.”

“We used to call them voter deserts,” Zermeño said. “You could walk through my neighborhood and there were no signs, no mail. What folks have said to us time and time again is that they don’t see themselves as part of the process, they don't see their policies reflected in what is being pushed both at the state level and the local level.”

COVID-19 has also disproportionately affected the Latinx community, Zermeño said. Some racial and ethnic minority groups are at increased risk for getting sick or dying from COVID-19, according to the Center for Disease Control and Prevention website.

“There is no safety net for our folks,” Zermeño said “There’s been no health care Medicaid expansion in the state of Texas and no access to good jobs that provide health care or wages where you can actually … stay in your home or apartment during this pandemic. We’re tied, and nobody is really speaking to those needs.”

Zermeño said Latinos will represent the largest population in Texas by 2022. Kumar said her goal is to close the voter registration gap and register people as fast as possible.

“My biggest concern (is) how Trump’s (advancements) in the Latino community (are) on nobody's radar,” Kumar said. “It is not an advertisement that we see on TV … in print or on radio. It is all the inroads of chipping away, of talking to the Latino community through each other and sharing information that is not accurate through our WhatsApp and our Facebook.”

“For us and for our communities, this is a breakthrough moment,” Zermeño said. “This is the story we have been telling, and now it’s exposed raw. Both the social injustice that’s been happening and then the economic injustice, the fact that there is no safety net for our folks.”