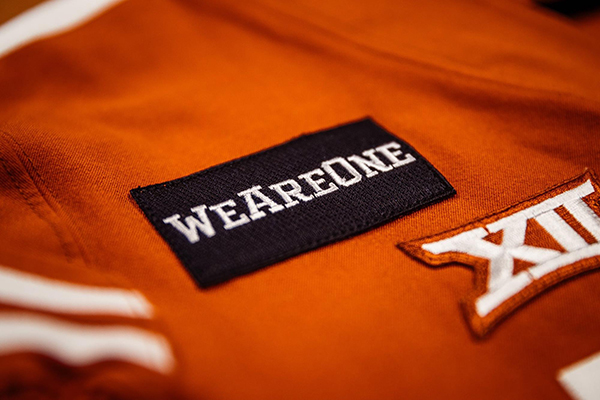 Renditions of “The Eyes of Texas” after Longhorn sporting events may never again be like the spectacles of old — especially not now, when fans, students and athletes seem irreversibly divided on the song's history and meaning.

Texas football players sported social justice messages on their uniforms during the Longhorns’ home opener Saturday, with “Unity” on the back of their helmets and black “WeAreOne” patches on their jerseys. But the post-game scene of fans singing “The Eyes of Texas” as most players ran to the locker room wasn’t a unified picture.

“I won’t sing the song at all, if I’m just being blunt,” junior safety Caden Sterns said in a Zoom teleconference Sept. 8.

Sterns shares the sentiments of several other players and student-athletes at UT who called for the University to remove “The Eyes of Texas” as the school song because of its minstrelsy origins on June 12, among other action items that would advance diversity and inclusion on campus for Black students.

The University responded July 13 when it announced that it would acknowledge the origins of “The Eyes of Texas,” but keep it as the school song. However, UT renamed Robert Lee Moore Hall as the Physics, Math and Astronomy Building, and will erect a statue of Julius Whittier, UT’s first Black football letterman, at Darrell K Royal-Texas Memorial Stadium, among other actions.

“I think they handled it very well, (but it) could’ve been better,” Sterns said last week about the University’s changes. “But it’s always a great first step in how we handle it. As a team, we came together, for one, which is huge.”

Texas played on the newly named Campbell-Williams Field Saturday, which honors Black Heisman Trophy winners Earl Campbell and Ricky Williams. The name change came at the request of the family of Joe Jamail, whom the field formerly honored.

Williams said in a Zoom teleconference Sept. 9 that it's important to not erase the history of “The Eyes of Texas,” and that it would be impactful to change its meaning. To Campbell, the song has a positive connotation.

“What happens at this University changes the world, and I’m part of that because I’m at this University,” Campbell said. “And I’m proud of that song. I think there’s a lot of things that could be done other than (changing) that song in my opinion. I just believe that ‘The Eyes of Texas’ stands for something.”

For a large population of Texas fans, the alma mater is sacred. Numerous fans took to Twitter to express their satisfaction that those at the game continued to sing it.

The polarization caused by the song and athlete protests is something Williams said his coaches tried to avoid when he played at Texas from 1995-1998.

“Whenever players even whispered about social issues, we tended to be shamed by coaches as being a distraction,” Williams said. “I’m proud of (Texas head coach Tom Herman) for really listening and supporting his players and not shaming them for having a voice.”

Times have changed, and today’s Texas players are speaking out. The Longhorns’ activism efforts might upset fans, but senior defensive back Chris Brown said he and his teammates are prepared for whatever reactions come their way.