Texas tailgaters party on, but struggle in football season-opening weekend 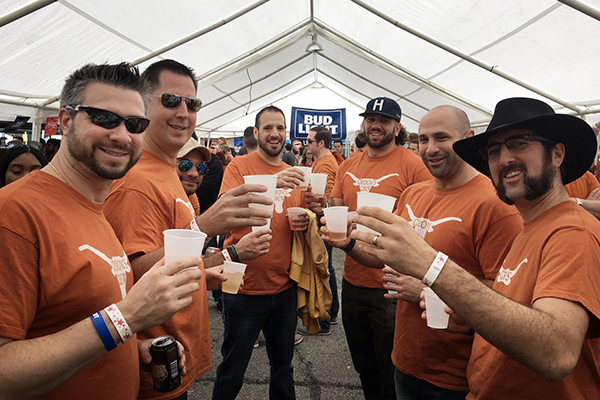 Texas Athletics may have banned football tailgates due to COVID-19 concerns, but Longhorn fans who still want to tailgate are finding ways to partake in game day fun.

On Saturday, Horn-Ball Texas Tailgaters partied on, making it the only tailgate in the campus area on game day after Texas Athletics announced Sept. 2 that tailgating on campus would not be permitted at any home game this fall.

The paid tailgate took place after Horn-Ball owner Ryan Lepper drafted a proposal to the state of Texas to host a special event in a lot on the corner of 18th and Trinity Streets on game day. In the proposal, Lepper ensured the tailgate would have a reduced crowd capacity, as well as enforce mandatory face coverings and a minimum of 6 feet between tents.

“If there’s a football game, we’re going to have a tailgate,” Lepper said. “Where there’s a will, there’s a way.”

In years past, Horn-Ball earned a reputation for being one of the largest tailgates in the country. Before the coronavirus pandemic, upwards of 750 fans would attend tailgates before home games, Lepper and his staff said, adding that as many as 2,500 fans attended the tailgate for Texas’ home game against LSU in 2019.

This year, things look significantly different for the tailgaters. The six 600-square-foot canopies filled with ice luges and open bars have been replaced with 10-by-10 foot tents stocked with hand sanitizer and no more than 10 people in each.

This past weekend, things didn’t go as planned in the tailgate’s first event of the year for Texas’ home-opener against UT-El Paso.

Although the tailgate’s capacity was 100 people, less than 10 were in attendance within two hours to kickoff. Lepper said he hoped to see at least one party occupying each tent that close to kickoff and that Horn-Ball lost money by hosting the tailgate Saturday.

“The season openers are pretty big crowd pleasers, but I think there’s a lot of caution going on right now,” Lepper said. “For a typical game, we’ll sell 300 to 400 tickets pre-game, (but) it just wasn’t like that, because it can’t be like that right now.”
Chris McClelan, 26, was one of the handful of people to attend the tailgate. Even though he’d never attended a Horn-Ball tailgate before, he was surprised at the attendance and expected a much larger crowd.

“It’s way smaller than I was used to seeing before (the pandemic),” McClelan said. “It’s kind of sad. I understand the pandemic and everything is a problem, but it really feels lackluster. When I first came here, I thought there’d be a lot of people, but (there isn’t) really.”

Lepper said he isn’t hitting the panic button yet. He and his staff are confident business will pick up as football season goes on, but the biggest challenge the tailgate will face will come if Texas cancels its season –– something entirely out of their control.

Gina Egan, a Horn-Ball bartender, is excited Texas is playing its season but only gives the school a 75% chance to play all 10 scheduled games. Still, she remains optimistic that the Longhorns will play their full schedule and that Horn-Ball can pull off a season-long tailgate.

“Besides it being the Longhorns, it’s just Texas football in general that we’ll do everything possible to make sure it actually happens,” Egan said. “I am a little nervous, but I think with the right precautions, we’re going to be okay as long as everybody acts responsibly.”