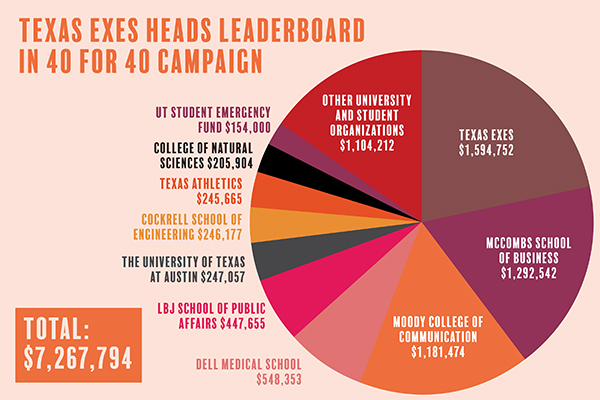 Kellie Sullivan, UT associate director for special programs, said this year was the first completely virtual 40 for 40 campaign, but it set the record with over 7,600 donations. The 40-hour fundraiser included over 70 student organizations, but none made it into the top 10 spots of the University-wide total dollars.

Texas Exes, the McCombs School of Business and The Moody College of Communication raised the largest amounts.

Simona Gabriela Harry, an English and Black Studies senior, said she was disappointed that student organizations did not receive top donation amounts since they would reap the most benefits from the campaign.

The money raised by the Texas Exes will be used for the general scholarship fund, the Forty Acres Scholarship Program and Texas Exes chapter scholarships, said Jamie Puryear, director of marketing at Texas Exes. Puryear said the Texas Exes board of directors did not push their members to donate to just Texas Exes, but towards the campaign in general.

“We were not directing gifts any which way,” Puryear said. “It was up to the individual to go to the area which they were interested in supporting. That way, it amplified all of campus and all of the different opportunities. At this time, funding is critical for the University and the students.”

Harry won the 40 for 40 Social Media Challenge, which asked participants to post pictures of them showing Longhorn pride. Harry won $1,000 and said she donated her prize to Texas Orange Jackets, a student organization that provides scholarships and services to women and non-binary students.

“The money wasn’t for the use of our actual organization, but towards trying to meet our goal (in) getting the For Texas – Women’s Empowerment Scholarship officially endowed,” Harry said.

The Texas Orange Jackets raised $38,887 total and ended the campaign in 20th place for donations.

June Deadrick, a UT alumna, Texas Exes board member and Black Alumni Network ambassador, said she promoted the campaign on her Facebook. Deadrick said because of recent calls from UT students to increase scholarship funds for Black students, there was an increase in dollars raised for the Black Alumni Network.

“Scholarships are very important to me, making sure that the next generation of students has what they need to succeed at UT,” Deadrick said. “We were calling our networks and friends, and asking them to specifically give us the Legacy Endowment Scholarship. We want to make sure that we get our scholarship done, so that we can help by giving to Black students.”