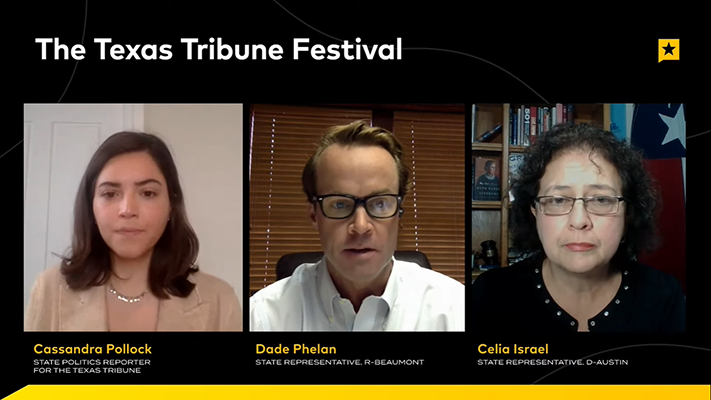 State Rep. Celia Israel, D-Austin, said there are over two dozen Democrat-affiliated groups working to flip the Texas House of Representatives from red to blue in the November election.

Israel and State Rep. Dade Phelan, R-Beaumont, discussed the Texas House seats in a prerecorded conversation “Will the Texas House Flip?” that aired Tuesday morning as a part of the 2020 Texas Tribune Festival.

“We have a lot of things to watch over, but I feel like this year, I have been involved in a lot of campaigns,” Israel said. “I feel as if everybody is working cohesively.”

Israel said the Democrats are focused on flipping the House, but they cannot forget that they flipped 12 seats in November 2018.

“Everyone tells us this is a wave election that’s coming towards us for a variety of reasons,” Israel said. “The common phrase I’m hearing is that people are going to go over crushed glass in order to vote this session.”

Israel said the Democrats need to take advantage of the political wins coming, and in a state as big as Texas, there are a lot of races that need to be looked at.

Phelan said he thinks there are only 14 races that are coin-tosses instead of 22 in this year’s election.

“I think the list (of incumbents to defend on the Republicans’ side) is significantly shorter,” Phelan said. “I don’t think that is that large of a universe. We have great candidates.”

Phelan said a message that could cause people to support House Republicans is that Austin City Council cutting the local police and 911 budget makes several voters feel unsafe.

“Some of the civil unrest and the rioting that is occurring across this country and here in Texas and what we saw at the Texas Capitol was unacceptable,” Phelan said. “We had to have 400 (Department of Public Safety) officers sleep inside the Capitol to defend it from these, you know, anarchists. I don’t know what cause they were trying to support because it wasn’t productive at all.”

Phelan said after 20 years of control, the Republicans forgot how to fight and were complacent during the last election.

“We learned a valuable lesson last cycle that no seat can be taken for granted, and you have to engage a voter,” Phelan said. “If I had come onto this TribFest in July, I would honestly have had a hard time saying we’re going to keep control of the House … Things have certainly changed over the last six to eight weeks, and they may change again.”