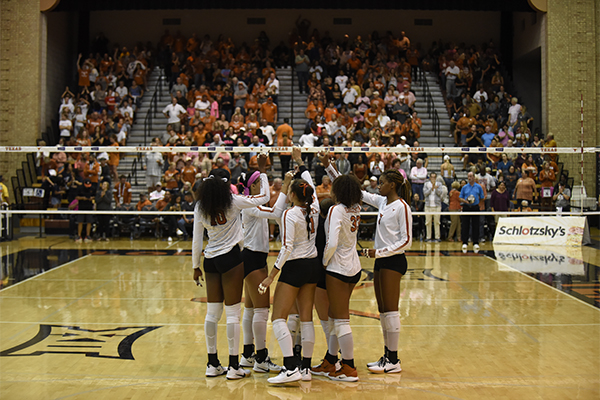 Texas volleyball players are not allowing the Black Lives Matter movement to leave the spotlight.

The team showed its support for the movement in a video released Sept. 9. In the 41-second black-and-white clip, volleyball highlights interweave with footage of players at Black Lives Matter protests. In between the shots, various players on the team speak out about social justice to the camera. Since the police killing of George Floyd in Minneapolis on May 25, the women within the volleyball program have been vocal about their allegiance to the movement.

“I won’t always be an athlete, but I will forever be a Black woman,” freshman outside hitter Madison Williams said in the video.

Junior outside hitter Logan Eggleston and redshirt sophomore middle blocker Asjia O’Neal wrote the video’s script, according to a Texas Athletics spokesperson. Along with Eggleston, Williams and O’Neal, sophomore opposite hitter Skylar Fields and junior middle blocker Brionne Butler also shared their message in the video.

The video, which garnered almost 200,000 views on Twitter as of Thursday evening, ends with four shots of players saying “Black lives matter” into the camera.

Players on the squad have supported the movement on their personal social media accounts as well. O’Neal and Eggleston took to social media over the summer to demand justice for Black people around the United States.

“I am Black before I am anything else and the tragic events happening in our country directly affect me, my family, my friends, and my community,” Eggleston said in an Instagram post June 2. “This is the time to use our voices to promote change and bring people together to advocate against injustices that directly affect the hearts and lives of so many of our friends!”

O’Neal posted an Instagram photo of herself at a protest in Southlake, Texas, holding a poster that said “Silence = Violence.” She shared her desire to keep the movement alive in another Instagram post.

“Being a young Black girl going to predominantly white schools in predominantly white cities, I rarely saw people who looked like me or those that could relate to me,” O’Neal said in the post June 1. “While I’m glad that over this past week our country has had their eyes opened to the tragedies that my people have faced since the day that they were brought here in bondage, I don’t want to only see support while #blacklivesmatter is a trending topic.”

Senior setter Ashley Shook, who posted a black square for Blackout Tuesday on June 2, stood behind O’Neal in the video, showing her solidarity with the movement. Junior libero Sydney Petersen and junior setter Jhenna Gabriel reposted on Instagram the actions list put together by Texas athletes who called on the University to make changes that advance diversity and inclusion on campus.

O’Neal said in her Instagram post that the diversity within the Texas volleyball program is what drew her to the team, adding that she will continue to use her voice and her platform for systemic change.

“Coming to college and being around people from various ethnic, religious, and economic backgrounds was one of the best things that could have happened to me,” O’Neal said. “Now, being in a culturally diverse setting, I feel as though I have a true voice and platform to speak out on the racism in our country."