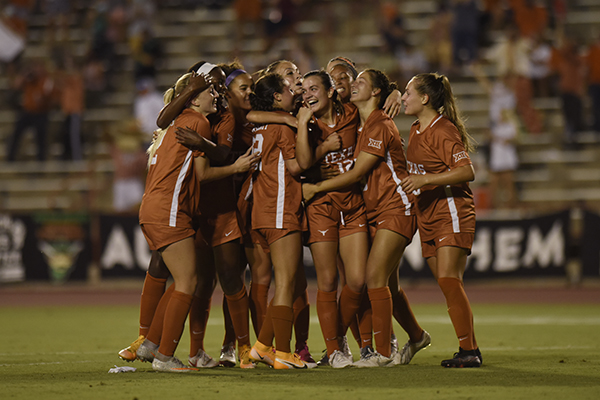 This year’s annual “Red River Rivalry” matchup between the Texas and Oklahoma soccer teams ended with a 1-0 victory for the Longhorns Friday night.

It was the first match of the season for the Sooners, who had their first two matches postponed.  Meanwhile, Texas looked to finally capture its first goal and win of the season.

In the moments leading up to the game, the Longhorns posed for a picture that showed their continued support for the Black Lives Matter movement. The team also held signs with phrases such as “say her name” to bring attention to the recent verdict on a case involving Breonna Taylor, who was shot and killed by Louisville police officers.

Both teams locked down on defense to start the match, but played fairly conservative on the offensive side of the ball.

Only three total shots registered in the first 20 minutes. Sooners freshman midfielder Cailey England found a great goal look at the 17-minute mark, but was denied before she could get the shot off.

The offensive energy from both teams quickly evolved as Texas’ standout freshman forward, Presley Echols, launched a shot of her own at the 22-minute mark.

A controversial offsides call at the 35-minute mark overturned what would’ve been the Longhorns’ first goal of the season.

Texas continued to apply pressure until halftime and held the advantage in time of possession 55% to Oklahoma’s 45% in the first half.

Texas’ energy carried over into the second half, as the Longhorns launched an onslaught of shot attempts early on.

At the 52-minute mark, both senior midfielder Haley Berg and sophomore forward Sydney Nobles registered a shot a piece within a minute. Oklahoma goalkeeper Nikki Panas rejected both shots, as both teams continued their search for a score.

The Sooners soon responded, as they evened up the shot attempt total to seven and found a rhythm.

In the 63rd minute, a shot by Echols, orchestrated by Berg, resulted in the Longhorns’ first goal of the season and Echols’ first score of her career thus far.

Complacency would have cost Texas, as a hungry Sooners unit looked to respond with a run of their own. However, the Longhorns refused to slow down, continuing to apply pressure with more shots.

Texas’ aggression carried on as its 1-0 advantage lasted until the match’s end.

Despite a number of controversial calls the Longhorns were able to capture their first win, which was much needed in the shortened season.

The Longhorns will face a 2–0 West Virginia team in Morgantown on Oct. 2, which will mark their toughest challenge of the season thus far.