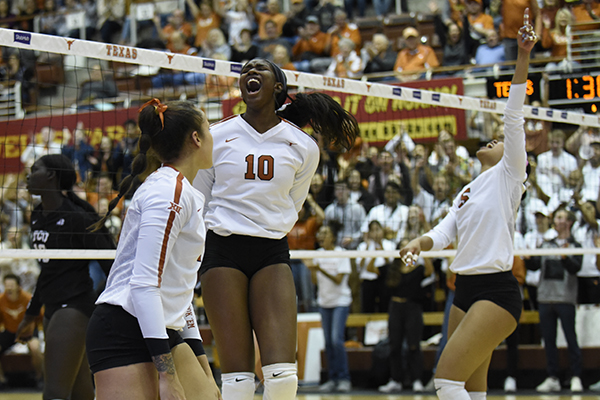 The Texas volleyball team picked up its second win of the season Friday, beating Oklahoma 3-1 on its second night in Norman.

The Longhorns completed the two-game sweep with a balanced attack that proved to be too much for the Sooners to handle. Texas totaled 69 kills to Oklahoma’s 43. Junior outside hitter Logan Eggleston led with 18 kills. The win pushes the Longhorns’ streak to 12 straight against the rival Sooners.

Sophomore opposite hitter Skylar Fields came out swinging in the first set, tallying six kills en route to the Longhorns’ convincing opening set victory. Fields would end up with 16 total kills on the night.

Oklahoma came out much stronger in the second set, taking an early lead and centering its attack around freshman outside hitter Guewe Diouf. Texas responded with strong sets from junior middle blocker Brionne Butler and Eggleston, ultimately pulling away to win the set 25-20.

The third set proved to be the most exciting, with Oklahoma playing its best volleyball of the match. The Sooners held a 24-20 lead late in the set before the Longhorns saved multiple set points. The teams fought back and forth, but ultimately, Oklahoma pulled away, taking the set 29-27.

In response, the Longhorns jumped out to an early lead in the fourth set that they easily held onto, taking the fourth set 25-13 and securing the series sweep.

Texas struggled with service errors in their opening match of the season, a trend that continued in Friday’s contest. Over the two matches, the Longhorns totalled 27 service errors with only six aces. That ratio will need to improve as the season progresses.

Freshman libero Nalani Iosia has gotten significant playing time to start the season. Iosia has a strong jump serve that could wind up being an important weapon for the Longhorns who have struggled in that area so far.

Anchored by graduate student libero Morgan O’Brien, who has impressed early on as a key piece for the Longhorns, Texas was solid defensively. The Longhorns will look to O’Brien’s experience and leadership to help guide the team.

Texas will be back in action next week starting Thursday with two home matches against Kansas.