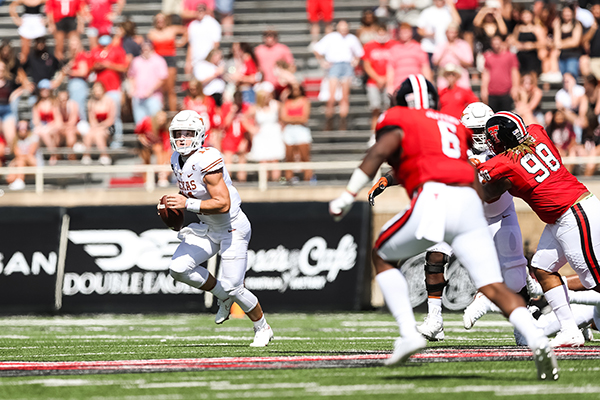 If Texas fans and football players learned anything Saturday, it’s that Sam Ehlinger can’t do it all, but he sure knows how to play the role of a hero.

When the senior quarterback stomped into the end zone for the Longhorns’ first touchdown of their narrow 63-56 overtime win over Texas Tech, it was nothing Red Raiders head coach Matt Wells didn’t expect. Wells said Monday that Ehlinger’s speed and elusiveness sets him apart, but his athletic ability isn't the only thing that makes him special.

“The other thing that Sam has, is he’s got experience,” Wells said. “He’s led fourth-quarter comebacks, two-minute drives. He’s done that against Oklahoma in the Red River Shootout. He’s done it against Texas Tech.”

In the 98-degree Lubbock heat, Ehlinger didn’t waver when Texas was down 15 points with a little over three minutes to go in the game. He said the only way the Longhorns had a chance to win is if they believed.

“I think we learned that we’re never out of it,” Ehlinger said. “We made a lot of mistakes … We’re just thankful to walk out of here with a win, but (we’ve got to) continue to get better.”

For the Longhorns, the game was an exercise in controlling what they could.

Ehlinger couldn’t control the consequences of Texas' muffed punts, dropped balls or the defense’s missed tackles. He couldn’t change the fact that he threw an interception at the end of the third quarter.

Instead, Ehlinger looked ahead and down the field, throwing two crucial touchdowns when his team needed him most. He said after the game that his six-touchdown performance and the dramatic win still hadn’t sunk in yet. But he’s grateful, and so are his teammates — for him.

Coburn acknowledged what everyone else saw: It was a rough day for the Texas defense. But even as the defense allowed more points and the offense had to bail it out, Coburn said the team didn’t blame each other like they did last year.

Many of them banded together under Ehlinger’s leadership. Redshirt sophomore wide receiver Josh Moore, who caught the 18-yard touchdown pass that sent the two teams into overtime, said the quarterback never gave up on the game or on him.

“I told him after the game, ‘Man, I appreciate you so much for believing in me and giving me the opportunity that you’ve given me,’” Moore said. “Yeah we were down, but the feeling, the momentum we had, it was like we knew as a team as a whole that there’s no way we would leave this field with a loss.”

Ehlinger seemed to carry the team, but he couldn’t do it by himself. It was the Texas defense that forced the Texas Tech fourth down in overtime and sealed the victory with an interception from junior safety Caden Sterns.

It was junior kicker Cameron Dicker who executed the perfect onside kick — maybe only the second special teams play that went right for the Longhorns on Saturday —  that Texas recovered for those crucial fourth-quarter drives.

Despite his heroics for the Longhorns , Ehlinger may have become a villain to Texas Tech fans who witnessed the Red Raiders’ 17th loss to Texas in the last 21 meetings. As for Ehlinger, he said the game won’t go down as one of his favorites, just as “2020 in a nutshell.”

With the win, the Longhorns have started 2–0 for the first time in the Tom Herman era, but they knew nothing would come easy. Winning the game in Lubbock and playing football this season required faith, something Herman has a lot of in his quarterback.

“He looked at me and said, ‘They left us too much time,’” Herman said. “He said, ‘We’re going to tie this thing up and win it in overtime.’ And I believed him. If Sam Ehlinger was trying to sell me oceanfront property in Arizona, I’d probably write him a check.”

Editor’s note: An earlier version of this story stated that this game was Texas Tech’s 17th all-time loss to Texas. The story has since been corrected to say that this was the Red Raiders’ 17th loss to Texas in the last 21 meetings. The Texan regrets this error.