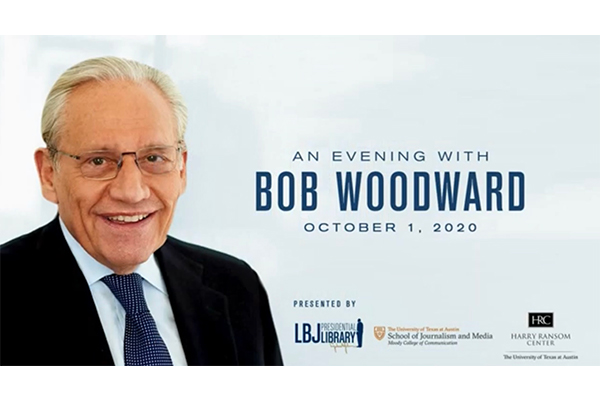 In his recent book “Rage,” investigative journalist Bob Woodward said President Donald Trump was informed of the COVID-19 virus on Jan. 28, 2020, in a meeting held by the National Security Council.

Woodward, associate editor of The Washington Post, is known for helping to break President Richard Nixon’s Watergate scandal. He discussed his book at a virtual event hosted by the Harry Ransom Center, UT’s School of Journalism and Media and the LBJ Presidential Library on Thursday night.

“Rage” was written based on Woodward’s personal interviews with Trump, which began in December 2019.

“I once asked Trump, ‘What’s the job of the president?’ And he said, ‘To protect the people.’ He failed to do that,” Woodward said.”

A week after the National Security Council meeting, Trump delivered the State of the Union Address, which is a constitutionally required message the president delivers to report pertinent information to the country, Woodward said.

“(Trump) devoted 15 seconds to the virus and said, ‘We’re doing everything we can,’ which of course, was not true,” Woodward said. “At this moment, the president could have said, ‘My national security team has come to me with convincing evidence. We have a public health crisis coming. We’re going to do everything we can.’”

Woodward said he wished Trump told Americans during his 2020 State of the Union Address to start washing their hands often, keeping 6 feet away from people and wearing a mask. He said according to experts, if Trump had relayed that information, it could have saved up to 150,000 lives.

“There is a sacred trust you have in the presidency, to share information with (the) citizens, and he failed,” Woodward said. “It was not until May that I learned of this key meeting. I’m embarrassed for him. I'm embarrassed that he did not find a way to step up to the task, because the task is quite simple.”

Trump wanted to downplay the virus in order to avoid panic, Woodward said. Woodward said following Pearl Harbor and 9/11, sitting presidents correctly informed Americans of the gravity of the situation.

“Trump does not plan. He doesn’t organize. He sends out messages and decisions by impulse and by tweet,” Woodward said.

Woodward said he does not know if there will be a peaceful transfer of power if Trump loses the election in November. Woodward said he once asked Trump if he would leave office if he loses in November, and Trump would not comment.

This is one of the few things Trump refused to comment on, Woodward said.

“Trump has made it very clear publicly that he is not going to step aside,” Woodward said. “He has promised chaos in the Nov. 3 election.”

Woodward said he thinks Trump will not work with the Democrats to ensure a fair and timely election turnout and has no concern for the correct counting of mail-in ballots.

“It’s the obligation of the president to think about the country more than himself,” Woodward said. “For the virus, he has smashed the country. He is going to smash the country again with this election. I tremble for what might happen.”