UT-Austin Theatre and Dance prepares for new way of performing 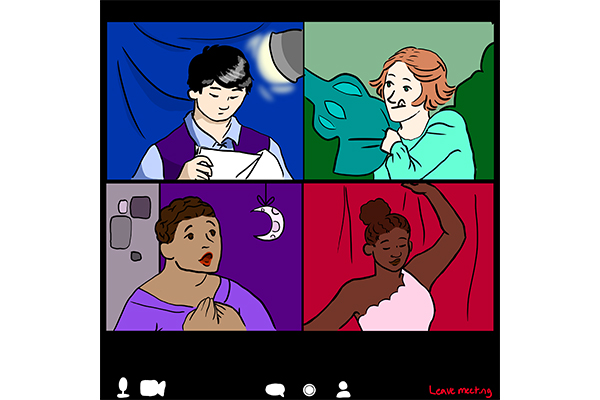 Before rehearsal, songs by Selena Quintanilla play over Zoom and cast members of the upcoming UT Theatre and Dance production “La Ruta” have a quick dance party.

Theatre and Dance students typically rehearse for hours a week, grabbing snacks together between scenes and building friendships during rehearsal. This semester, some productions are rehearsing and performing virtually, while others are meeting in person but taking precautions.

Live audiences have been banned for all Theatre and Dance performances, leaving student performers to act and dance in empty venues.

UT’s second fully online theatre production of the year, “La Ruta,” follows two mothers living in the border town of Ciudad Juárez, Mexico, as they uncover the truth of what happened to their missing daughters.

Rehearsals are fully virtual, and despite not performing together in person, cast members have managed to pull off fight scenes and hair braiding virtually. The show will be performed through Zoom and livestreamed Oct. 23 and 24 over Vimeo.

“I was honestly kind of scared,” said Vivian Gonzalez, theatre and dance and communication studies senior. “I didn’t know how correct it was going to look.”

Leah Benaim, stage manager for the dance performance “Re(current) Unrest,” said the group held in-person rehearsals in the Bass Concert Hall. Those who stayed home this semester could still be involved in the show as dramaturges, who help to research the historical references used in the performance.

“Anyone who comes into a rehearsal or is even in the space with us has to have a negative COVID-19 test,” said Benaim, a theatre and dance senior.

According to the UT Theatre and Dance website, “Re(current) Unrest” was livestreamed Oct. 16 and 17 and uses movement to explore unrest, the American dream, and the history of Black art and protest.

Although performing without a live audience posed new challenges, Beniam said the dancers connected to the audience in new ways. The camera operators used stationary and roaming cameras to capture the performance from various angles.

“That leads to a bit of dynamicness, and we can … clearly direct the audience’s eye and attention,” Beniam said.

For “La Ruta,” the Zoom format will provide the audience with closer views of the actors.

“What’s cool about this is you’re not a bunch of feet away from me in the last row,” Gonzalez said. “I’m right here, and you can really see what’s going on.”

The team behind “La Ruta” said they hope the audience is still impacted by the story.

“We have a great team of tech people and a great group of actors, and I think the story will still affect people,” said Guinevere Govea, theatre and dance and journalism senior. “I know I cry every time we run through it.”

To prepare for the showing of “La Ruta,” the UT Department of Theatre and Dance provided the actors with lights for their cameras, wireless earbuds, backdrops, costumes and more. Students living in Austin were provided personal studios in the drama building, where they will perform.

“They shipped me some costume stuff, and we did an online fitting,” Govea said. “It was crazy. They would just be like, ‘Turn off your camera, and go and change, and we’ll see how this looks.’”

Gonzalez said although performing through an online medium wasn’t ideal, it made the show more accessible. Aside from being online, tickets are “pay what you can” with a minimum cost of $5.

“My family is five and a half hours away, and they couldn’t afford to pay a $40 Theatre and Dance ticket, so having this online makes it more accessible for my family,” Gonzalez said. “They all have their tickets. They’re very excited.”