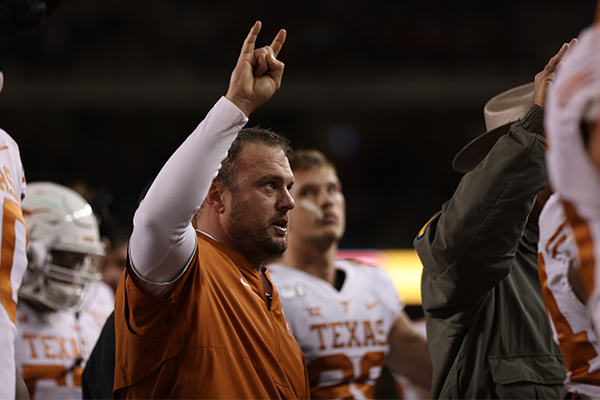 Last week, University of Texas President Jay Hartzell invited students to celebrate Free Speech Week from Oct. 19 to Oct. 25. He encouraged them to attend various online events about the importance of voting intertwined with conversations on the role a university plays during social unrest.

“Our hope for the future does not come from shutting down voices, but by embracing the responsibilities of respecting others, listening and learning that come with being a free and vibrant intellectual community,” Hartzell said in an email to the student body.

A day before Hartzell addressed the student body, Texas Athletics Director Chris Del Conte said in his Forty Acres Insider newsletter that players are expected to stand “unified” during “The Eyes of Texas” after games.

Head coach Tom Herman reiterated this in his Monday press conference. Even though players won’t be mandated to participate, they should still honor the fans and University, Herman said.

Hartzell’s email now seems ironic. The future of our world does not come from shutting down voices — unless you are a Texas football player representing one of the most valuable brands in sports. The athletic department should understand that players taking a stand against “The Eyes of Texas” is not disrespectful; it should be proud that the young men on their roster will unequivocally stand for the issues important to them.

The University’s slogan is “What Starts Here Changes The World,” yet some of the most important voices in the student body are expected to “honor” a song performed in minstrelsy. Take a look at the change student-athletes brought this summer. They ran a brilliant social media campaign seen and supported by thousands. They catalyzed the renaming of a campus building and Darrell K Royal-Texas Memorial Stadium’s field and dared the University to reevaluate one of its most beloved traditions.

Now, Texas is back in a funnel of outside noise. The stubbornness of the athletic department and a refusal from many Longhorn Band members to play “The Eyes of Texas” catapulted the University back into the spotlight. The nation is listening.

But the athletic department and University administration are prioritizing  the wrong voices.

Their push-and-pull has left Texas football players in a never-ending limbo. First, it was OK to leave the field before or while the song played. Now, it isn’t. Senior defensive lineman Ta’Quon Graham said it best Tuesday; he thought this issue was behind them.

Texas football players have been deeply understanding of one another’s views on “The Eyes of Texas.” But even though it is not mandated, the department’s expectation undermines “What Starts Here Changes The World.” It undermines the importance of the Free Speech Week Hartzell so adamantly pushed. Long conversations during team meetings don’t matter when administrators “expect” players to stand for a tradition rooted in blackface.

When will the athletic department understand its expectation blatantly contrasts with the University’s core philosophy? The role of a university during social unrest is exactly what Texas athletes accomplished this summer. They brought palpable and important change to the community.

Personal choice during the game does not exist. Players are all expected to follow the same playbook. But once those 60 minutes are up, Texas players should be expected to stand for what feels right — whether that is “The Eyes of Texas” or not.