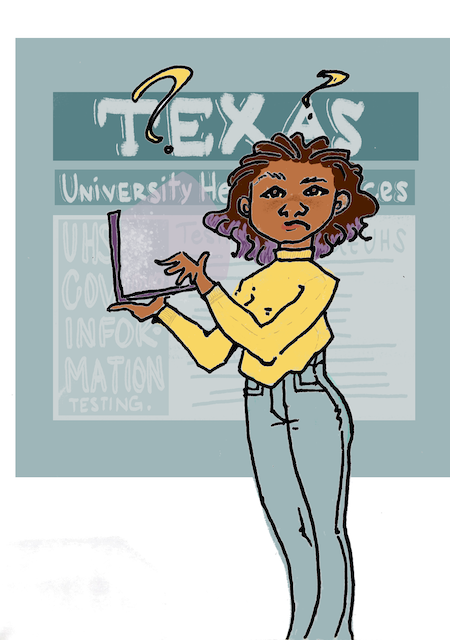 For Mia Hay, women’s and gender studies freshman, making her first proactive community testing appointment was a challenge. Hay’s schedule is hectic during the week and she struggled to find a time that worked for her with the clinic’s hours.

Proactive community testing is UT’s effort to incentivize asymptomatic students and faculty to get tested for COVID-19 “as frequently as once every two weeks.”

But University Health Services, the entity responsible for coordinating when, where and how students can schedule a proactive community test, has created an irregular and confusing testing system.

With varying weekly hours and no testing on weekends, UT’s proactive program is currently too inconsistent to efficiently meet students’ testing needs.

UT’s goal is to test up to 5,000 members of the UT community per week, but right now it’s only testing around 3,000. UHS has a number of problems it must address before proactive testing can actually become a part of students’ normal routines.

Through establishing regular times and locations and extending proactive testing to the weekend, UT can improve its current system and do more to keep students safe.

We’ve struggled to find consistency in both where and when PCT is regularly offered each week.

Andreas Matouschek, core facilities director of the Center for Biomedical Research Support, attributed these inconsistencies to the attempts of UHS to cater to a variety of student schedules.

However, psychology junior Meghana Rao, who tries to get tested weekly, said the inconsistent times make it hard for her to adapt her schedule accordingly.

“Whenever my friends and I want to get tested, we have to strategically plan it,” Rao said.

UT intended for proactive testing to become part of students’ weekly routines, but students can’t build a routine around a schedule that changes week to week.

Matouschek said the decision to remove Fridays from the proactive testing schedule was purely operational because the testing center needed to have at least one day for maintenance and repair.

But students’ inability to get tested on Fridays and the weekend undermines UHS’ attempts to cater to a wide array of student schedules. For students who spend their weeks in class, at work and attending to other responsibilities, weekends may be the only time they’re available to schedule appointments.

“I think weekend hours would be really helpful because some people, like me, are really busy during the week,” Hay said.

Matouschek noted there has currently not been a large enough demand from students to justify scheduling staff members for shifts over the weekend.

But from our own experiences and conversations with students, it seems like the demand is there. Even if UT doesn’t have enough data to draw conclusions about when students most commonly come in for testing, students would benefit from having the option to get tested on Fridays, Saturdays and Sundays.

UHS needs to be deliberate about its analysis of foot traffic at proactive testing sites during the week to determine which days students frequent testing sites the least. UHS should then schedule maintenance and repair on this day, so the staff responsible for these hours could be shifted to Fridays, Saturdays or Sundays.

Of course, this kind of analysis would only be possible if UHS had a consistent testing schedule that didn’t change every week.

It would benefit both UT and its students for UHS to maintain a uniform, unvarying proactive testing schedule. Without these changes, UT won’t reach its 5,000 goal, and students will lose the opportunity to protect themselves and others.