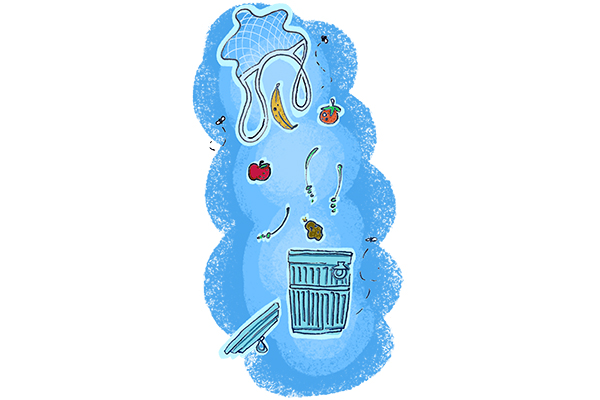 Becky Xu has been around food all her life. She grew up in and around her parents’ Chinese restaurant and quickly took notice of how much food was wasted daily.

“I noticed just how much food we throw away everyday,” computer science senior Xu said. “As I learned more about sustainability and did some more research in that space in college, I realized that I wanted to take concrete steps to help divert food waste.”

In the United States, 30-40% of all food goes to waste, according to the Food and Drug Administration.

“Knowing that perfectly good food is being thrown out just because of the way it looks or because of inaccurate storage methods … I (think) it’s such a waste,” Xu said.

Xu is the chief technology officer for Throw-A-Weigh, a food waste data tracking tool created by a group of UT students and alumni working to reduce food waste in grocery stores.

The group was formed as a part of a class project for the College of Natural Sciences’ Inventors Program Practicum Course in the fall 2019 semester. The group then decided to continue their work beyond the assignment.

“After the class ended, I continued to stay on the team because I really liked everybody’s work ethic as well as how well we worked together,” Xu said.

Rosaline Chen, former Longhorn and chief information officer for Throw-A-Weigh, said the team is designing a machine that will help grocery stores reduce the amount of food that goes to waste. The machine will scan and identify the produce using image recognition, record the weight and upload the information to a database, then drop the produce into a collection bin.

The team hopes to use this data to discover why specific produce goes to waste, which will encourage grocery stores to adjust storage locations and refrigeration temperatures. Chen said this would theoretically save money and reduce waste.

“Food waste touches so many environmental issues as well as public health issues,” Chen said. “(Our project is) a small part in the grand scheme of how we can make a more sustainable world for the future, but I still think it’s a space worth tackling.”

The Throw-A-Weigh team said they are working with the Wheatsville Food Co-op on Guadalupe Street to do further research and refine their product. The team is passionate about its mission and plans to continue expanding to other stores and suppliers.

“I don’t think there’s a limit to how far this can go,” said Arianne Elder, a mechanical engineering senior and a team engineer for Throw-A-Weigh. “I think this has the potential to really scale up and turn into something that can (be) implemented in stores throughout Austin, throughout Texas and eventually nationwide.”

The team said they are currently participating in the Tarmac TX accelerator program and are semifinalists in the DisrupTexas Pitch Competition.

“For me, it’s not really about the money, it’s more about the fact that we were chosen,” Chen said. “It’s nice to see that other people believe in us too.”