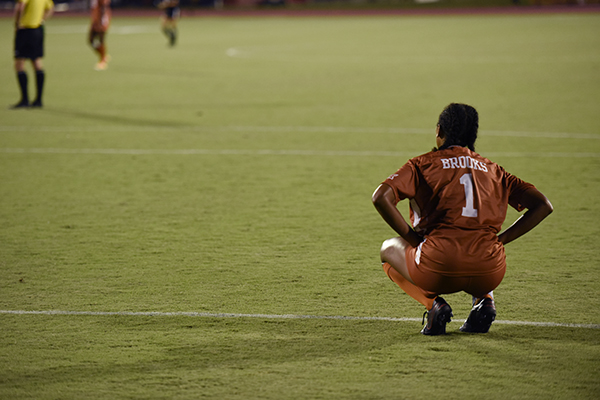 The Texas soccer team fell to Texas Tech in a heartbreaking 1-0 loss to conclude one of the most unconventional seasons in recent memory.

The Longhorns entered the match with a 4–4 record, ranked at fifth place in the Big 12, and the Red Raiders came in at 1–4–2 looking to win just their second match of the season.

Despite the record differences, Texas Tech had plenty to be confident about, as the team won its last two meetings against Texas.

Early on, both teams looked lethargic on the defensive end, allowing shot attempts to fly left and right. From an offensive perspective, both teams were very aggressive.

In the fifth minute, Texas junior outside back Cameron Brooks launched the first of many shot attempts, nearly scoring from 2 yards out.

Immediately after, the Red Raiders responded by countering with a shot attempt of their own. The Longhorns’ star senior midfielder Haley Berg took a shot at the goal just two minutes later, but the right crossbar denied her.

The early fast tempo allowed both teams multiple chances to take a lead, but neither were able to convert.

For Texas, a first-half positive came from senior goalkeeper Savannah Madden. Madden denied two Texas Tech shots that looked like sure goals for the Red Raiders.

Madden’s exceptional play last week awarded her Big 12 Conference Goalkeeper of the Week. Although neither team was able to score in the first half, the Longhorns held a strong 9-3 shot advantage.

To start the second half, Texas Tech looked to make a statement. While Madden denied a Red Raider’s quick shot attempt in the 47th minute, the match’s game-changing play came soon after. In the 54th minute, Texas Tech senior forward Kirsten Davis struck a midfield goal from over 20 yards out.

With a 1-0 advantage, the Red Raiders held all the momentum and controlled the pace for the rest of the match.

The Longhorns were unable to find the opportunities that were presented in the first half. As time wound down, Texas’ offense looked less and less likely to even the score.

In the 67th minute, Madden came up with one last critical save to keep her squad alive. Soon after in the 76th minute, Berg received a great look at a goal but was too wide on her shot.

The Red Raiders were able to hold on to their 1-0 lead en route to their third consecutive win over the Longhorns.

Although the 2020 season didn’t go as planned for Texas, the team has plenty to look forward to. The squad returns 20 athletes, including star freshman Presley Echols, who is poised to have an impressive sophomore season.