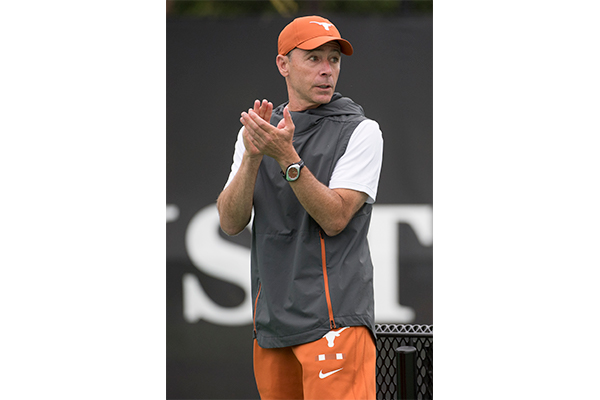 The Texas men’s tennis program was at a standstill in March 2019 when UT terminated 18-year head coach Michael Center because of his ties to the 2019 college admissions scandal.

Center was sentenced to six months in prison for accepting $100,000 in 2015 to falsely admit a student into the University. To replace him, Bruce Berque was appointed as the interim head coach.

“(Berque’s appointment) was really comforting because, obviously, we were all in shock right at the start,” said junior Chih Chi Huang, a freshman during the scandal.

Berque came to Texas in 2014 and began as a volunteer assistant coach. He held this position for a year before becoming an associate head coach.

“In some ways, it was a smooth transition because I wasn’t coming from the outside, you know, like (how it) sometimes happens when there’s a coaching change,” Berque said. “ I was already here and already had a relationship with all the players, and things were overall going well.”

The Longhorns earned three Big 12 championships under Center and finished as a runner-up in the 2008 NCAA national championship. Texas’ 2018-19 squad was a strong team, holding an undefeated record before the tumult of Center’s case hit the program.

With Texas in the hot seat, Berque quickly shifted the focus and led the Longhorns to the program’s first NCAA national championship.

“To have someone there to guide us each step of the way and put our minds in the right place of tennis and not think about all of the external stuff and just focus on what we needed to focus on — like practice, weights and getting ready for matches, all of that stuff combined — I think he did a really good job,” Huang said.

On May 23, 2019, days after the Longhorns earned their national title, Berque was named head coach of the program. But even in his new role, Berque chose to lead the program just as he had found it.

“Berque always kept the winning tradition of Texas tennis as they were, but he just added his own coaching style,” 2020 alumnus Christian Sigsgaard said.

Texas’ success on the court since is not just a product of the hard work the team puts forth but also a reflection of the synergy between the team and Berque.

“In the national championship match, we lost the doubles point, and Berque came up to me and told me that if I win my singles match, we will win the championship,” Sigsgaard said. “That trust gave me a lot of confidence, and I performed very well because of that.”

While Berque has only held the reins of the men’s tennis program for a year and a half, he has already made a name for himself — one that will leave a mark on the Longhorns that pass through his program.

“I'm happy that I was part of a team that (won its) first national championship in Texas,” Berque said. “So I'll always be proud of that, but right now, every year, I'm just trying to help our guys have a great experience, and I want them when they leave here to be able to look back at their time in Texas and look at it as some of the best years of their lives.