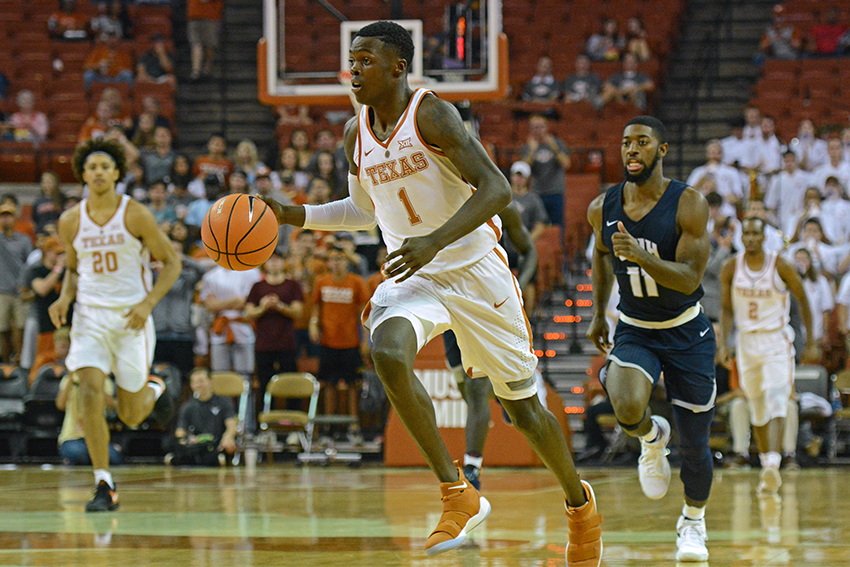 On paper, there’s no way to go but up for the Texas men’s basketball team. Every single player on last year’s squad will return this season, with the addition of Greg Brown, a five-star recruit and freshman forward.

The experience of the returning roster coupled with the intrigue of ESPN’s No. 9 recruit in the nation vaulted the Longhorns to No. 19 in the AP Top 25 preseason rankings and No. 9 in the KenPom preseason rankings. This is despite last season’s 19–12 record and lackluster bid for the NCAA Tournament.

But with the depth comes a roster crunch, especially in a shortened season. Head coach Shaka Smart said in a Tuesday teleconference that finding the right rotation would be the “biggest challenge” for his coaching staff this season.

“Really, all of our returning guys at different moments last year helped our team, but I don’t want to base everything off of last year,” Smart said. “I think at times in my coaching career, I've tried too much to maybe play too many guys or focus on where the ninth, 10th or 11th man is mentally. But the reality is, we have the right thing for Texas and Texas basketball.”

Senior guard Jase Febres, who had a microfracture knee surgery in March, is working his way back on the court. Smart declined to provide a timeline for Febres’s return but said he wasn’t expecting the guard to be ready for the Nov. 25 season opener.

For now, Texas will lean on its other top contributors from last season in senior guard Matt Coleman, redshirt junior guard Andrew Jones, junior guard Courtney Ramey and senior forward Jericho Sims. Smart said these players have separated themselves from the rest of the roster.

“The three guards stood out more than anyone,” Smart said. “Those guys just have a maturity about them in terms of their games … Kai Jones is probably the guy that has taken the biggest jump from last year, just in terms of his confidence and the way he's moving around out there on the court.”

Brown will certainly get his fair share of playing time, as Smart hasn’t been shy about playing true freshmen who were highly rated recruits.

Outside of Brown and the veteran guards, minutes for the rest of the roster are still up for grabs, Smart said. The first few nonconference games, including Texas’ season opener against UT-Rio Grande Valley on Nov. 25, will be crucial for determining how those minutes shake out.

“There's a bunch of guys in the middle that we really need to sort through (to find out) which of those guys can be most effective (in) helping us win in the game,” Smart said. “Obviously, we’re 15 days away from getting a chance to test that out.”

However, Texas won’t have much time to figure out the roster crunch. The basketball team finalized its full 27-game schedule this week after announcing that the Longhorns would play No. 3 Villanova in Austin for the Big 12-Big East Challenge.

After the Nov. 25 season opener, Texas will play in the Maui Invitational in Asheville, North Carolina, before entering arguably the toughest stretch of its schedule with Villanova on Dec. 6 and No. 2 Baylor in Waco on Dec. 13.