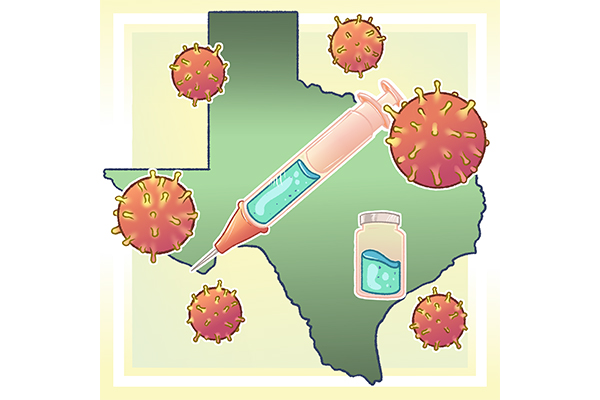 The Pfizer/BioNTech and Moderna COVID-19 vaccine candidates, both of which were over 90% effective in trials, incorporated research from UT scientists.

The UT research team designed two mutations that have been incorporated into the Pfizer/BioNTech, Moderna, Johnson & Johnson and Novavax vaccines, said Daniel Wrapp, molecular biosciences graduate student fellow and an author for the team’s publication in Science Magazine.

Principal Investigator Jason McLellan said the mutations affect the virus’s spike protein, a molecule on the virus’s surface that allows it to enter cells and infect them. Wrapp said the protein exists in a specific shape before infecting a human cell, and a different shape after infecting a cell. The two mutations stabilize the protein in the initial shape, which makes it more effective in a vaccine, Wrapp said.

“(For) an effective vaccine, you want to give a patient something that mimics what (the body) will see when they encounter a pathogen, in this case a virus,” Wrapp said. “On the surface of the virus, they would see the (initial shape of the) spike.”

McLellan, an associate professor of molecular biosciences, said his lab determines the 3D structures of parts of viruses, bacteria and toxins.

“We go from this cartoonish thinking of it as an oval or some shape to actually knowing where every atom is in these proteins, exactly how they look like and how they function,” McLellan said. “That allows us to rationally design or engineer interventions that can target these molecules and prevent the virus from entering our cells.”

Both the Moderna and Pfizer/BioNTech vaccines are mRNA vaccines, which use a person’s cells to create copies of the spike protein that contain the mutations the team designed, McLellan said. Once the cells create the proteins, the body’s immune system creates antibodies to fight against the virus, according to Nature. Research associate Nianshuang Wang said the team found the lab’s stabilized spike protein to be more successful in producing an immune response than the original protein.

Wrapp said the team began working on the spike protein structures in 2015, when there were no current coronavirus outbreaks. He said there wasn’t a clear practical application for the research at the time — it was just basic scientific research.

McLellan said because the mutations worked for previous coronaviruses, the team knew where to alter the COVID-19 virus when they learned about it in January.

“I know that the past 10 months have felt like an eternity, since everything has been locked down,” Wrapp said. “But in terms of vaccine development, the pace that has been going on is unprecedented, and none of it would have been possible without the years of federally funded research that occurred before the pandemic started.”

McLellan said he believes scientists shouldn’t focus solely on a few viruses, and science should be funded broadly so there is a base of knowledge available when needed.

“We should pay more attention (to) basic science and really get prepared for the next pandemic,” Wang said. “I think our lab is doing well in this regard, actually. We have spent a lot of years in this field, which was generally considered not a big issue.”