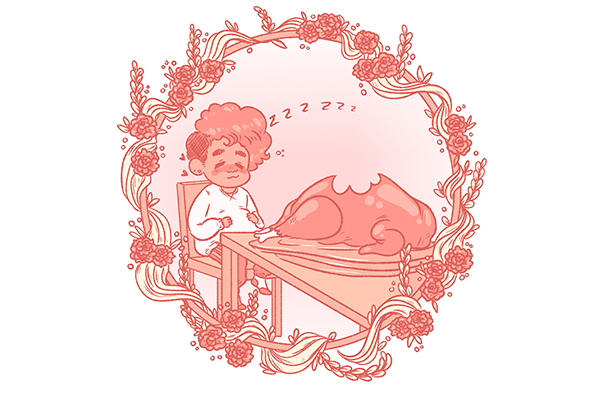 Although he may have some turkey or buttery mashed potatoes, Oscar Armando Lopez III said he looks forward to his family’s dishes, such as pozole and empanadas de cajeta, during Thanksgiving.

Some students celebrate Thanksgiving with food from their own cultures. They said taking the time to make and eat their traditional meals brings them closer to their families and heritage.

Lopez, a business and government junior, said being from the border city of Laredo, Texas, Thanksgiving has always been odd for him. He said the mixture of American and Mexican culture within the community is highlighted through food during the holiday season.

Because his family makes them seasonally, chicken tamales are always the first dish he thinks about when the holidays come around, Lopez said. He said making tamales is very methodical and always results in a family assembly line the day before Thanksgiving.

“Usually we’ll make the masa, which is like the batter,” Lopez said. “Then, you have the corn husks where the masa is held, and you basically have to lather the batter into the corn husks. Then, you put whatever fillings you’re going to have into it and steam them throughout the day.”

Lopez said there’s more than just food to be thankful for on Thanksgiving.

“Now that I’m older and a lot of my time is being spent in Austin, it’s always a reminder of those moments that I get to have with my family,” Lopez said. “I have family that lives out of town … so for me, the dish represents that idea of connection.”

Corporate communication junior Romelia Acosta said one of her favorite holiday treats is champurrado, a hot chocolate-like drink. She said the hot beverage is known all across Mexico in different variations, but her recipe represents the warmth of her family.

Acosta said because she has to cross the border between El Paso and Ciudad Juárez to visit her family, the time she spends with them during the holidays is always a gift.

“We appreciate being together and give thanks for having each other,” Acosta said. “We really value that time at the dinner table.”

With parents who immigrated from India, psychology junior Natania Christopher said her family didn’t start celebrating Thanksgiving until she was around 10 years old. She said her family now celebrates the holiday season with other Indian immigrant families in Dallas who also do not have extended family close by.

Tandoori chicken, which is chicken marinated in hung yogurt and spices such as chili powder, cumin and mango powder, is Christopher’s favorite holiday dish. But she said it’s not a celebration without biryani.

“Biryani is basically a really spicy rice and chicken dish,” Christopher said. “(However), there are a lot of vegetarian Indians, so we usually try to have vegetarian biryani as well.”

Christopher said for her family, Thanksgiving consists of a smaller lunch followed by a huge potluck dinner where you can find the biryani, tandoori chicken and tons of Indian desserts. This year, she will be celebrating with family and friends in a large outdoor area with masks and strict social distancing rules.

Even though she grew up in the United States, Christopher said being able to cook Indian food with her mother and aunt as well as celebrate with friends takes her to a place of comfort.