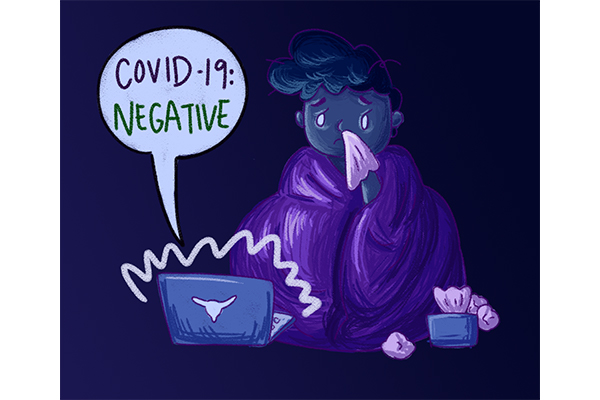 Kelly Ludwig’s film lecture at a community college in New York was drowned out by loud coughs as the person sitting next to her began to “hack up a lung.” Two days later, on March 7, Ludwig said she woke up with a sore throat.

According to the UT COVID-19 dashboard as of Nov. 23, 1,568 UT students and faculty have tested positive for COVID-19 since June 1. For most, recovery is quick. For others like Ludwig, the virus has had a lasting effect on their health.

“I had a dry cough that was unreal,” radio-television-film freshman Ludwig said. “I started coughing up blood. Doctors were not really concerned. My primary (doctor) initially said, ‘It's not (COVID-19). You have an upper respiratory infection, but you're fine.’”

Ludwig’s symptoms worsened quickly, and two weeks later she went to urgent care with a persistent low-grade fever, chest pressure, chronic fatigue and heart palpitations. The doctors told her that while they didn’t have the resources to test her for COVID-19, she was “presumed positive” and had pneumonia and a collapsed lung.

Now, Ludwig only leaves her home in Rochester, New York, to go to doctor’s appointments, and she has had to defer for a year. The 32-year-old plans to move to Austin in fall 2021.

“(COVID-19) itself suppresses your immune system, so now I'm immunocompromised,” Ludwig said. “I've been having heart palpitations. I have atypical scarring in my lungs. Most recently, I had a stroke (on Oct. 8).”

Esther Melamed, a neurologist at Dell Medical School, said “post-viral syndrome” is common among people with autoimmune diseases, as the body begins to mistake its organs and cells for the virus.

On Aug. 31, computational engineering freshman Alessandra Kessler received a rapid test for COVID-19. She said she was told her test was positive less than an hour later.

Kessler said after 10 days, her doctor cleared her to return to campus. Though her energy level is back to normal, she still hasn’t fully regained her sense of smell.

Melamed said loss of sense of smell and taste is a common symptom of COVID-19 due to the way the virus enters the body.

“We've learned … that the virus is getting (into the body) through the nose … (and) damages the cells in the nose,” Melamed said. “ Another explanation for why people develop the loss of sense of smell, is that the (area of the) brain that controls smell… gets damaged.”

“Lung-wise, there were times where I was coughing up a little bit of blood, but mentally, (I’m feeling) much better, which is nice,” McClair said.

McClair said he tested negative for COVID-19 on Nov. 9 but he is still coughing from lung irritation.

“The immune system becomes dysfunctional in a viral infection,” Melamed said. “Initially, (it) does its job … (getting) rid of the virus, but after the virus (is) gone, … the immune system stays revved up and keeps trying to fight with an invisible enemy.”

Ludwig, who still has COVID-related complications, said this experience has caused her to change her outlook on life.