Students give back to community through service efforts 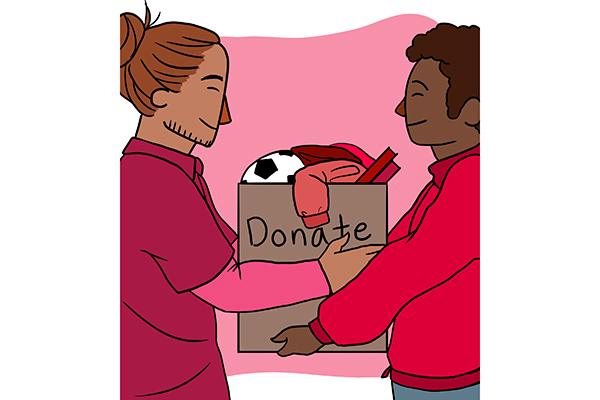 With the semester ending and Christmas right around the corner, some students and organizations have donated to local groups to give back to the community.

Under Interstate Highway 35 and across from the Austin Police Department, Alexia Richardson stood in front of tables full of donated clothes, bottled water, canned food and hygiene products.

“I needed a lot of financial help recently,” chemistry freshman Richardson said. “I just wanted to give back (and) help people the way they have helped me. So I went on Twitter, and I was like, ‘Would y’all like me to post this Cash App I made a few months ago for (helping people experiencing homelessness)?’”

In early November, Richardson set aside $150 of her own money for individuals experiencing homelessness and then asked others on social media to contribute. After raising $1,469, Richardson collected old clothes and used the money to buy other supplies which she later distributed to homeless individuals under I-35.

Richardson said she wanted to take action to help the homeless community in Austin because her family didn’t have secure housing when she was younger.

“I saw that there were a lot of people in need … and I feel that really deeply,” Richardson said. “I don't understand how people can see people … who need help and just ignore them. They're human beings. The biggest reason I've done this is (because) it needed to be done.”

40 A-Cares, a student organization launched in October, has been raising money for Caritas of Austin, an organization which helps prevent and end homelessness in Austin.

“Because of (COVID-19) … it's really difficult for us to work with them in person and under their already existing (programs),” said Roberto Serda, human dimensions of organizations and government sophomore and fundraising committee chair for 40 A-Cares. “We’ve been operating independently and letting (Caritas) know what we’re up to.”

This semester, 40 A-Cares has raised $1,100 through a profit share and five virtual fundraisers, including social media comedy challenges. The organization has also emphasized education on issues related to homelessness through their free speaker series, held through Zoom.

Every semester, students in the Latino Migrations/Asylum class are required to complete an act of community service. This semester, the class chose to hold a toy drive.

The class decided to donate to Upbring Transitional Foster Care, a foster home in El Paso which provides support to unaccompanied children. After contacting the home, the class learned the children were in need of toys.

“We were trying to brainstorm how we could give back and make these kids feel more comfortable and have something exciting,” Mariana Jordan, a communication and leadership and international relations and global studies senior, said.

In the beginning, Jordan said they only expected the 30 students in their class to donate, but it quickly grew beyond that.

“So there's 50 kids (in the foster home), and we (were) like if everyone in our class can commit to donating a little bit, then we'll have enough (to buy them each a toy),” Jordan said. “Then it completely blew up. We raised so much money.”

Jordan said the class raised $3,515 for their cause after asking for donations on social media. She said the support was overwhelming in the best way possible.

“I wasn’t expecting it to have such a huge contribution,” Jordan said. “(It) was incredible. Whenever we revealed to (our profesor) how much we had gotten (on) the second day, he had tears in his eyes. Everyone was really emotional."